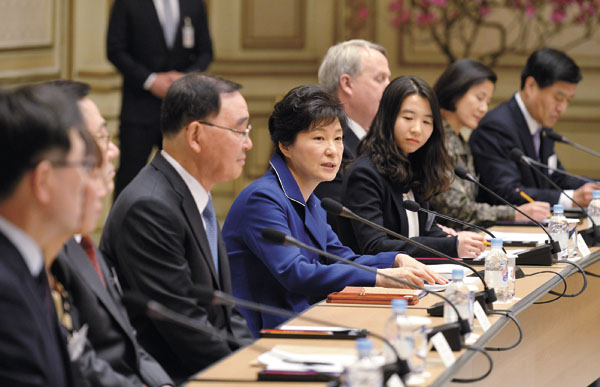 President Park Geun-hye is briefed Monday at the Blue House from the unification, foreign and defense ministries on their proposals for unification preparations. [NEWSIS]

The Park Geun-hye administration unveiled Monday a series of new proposals for inter-Korean projects, including an ambitious plan to operate trains from Seoul to cities in the North this summer by linking severed railway lines.

Four government offices including the unification, foreign and defense ministries briefed Park on their proposals for unification preparation and projects they would like to push this year. The briefing was arranged after the government stated that this year should be a turning point in the unification of the two Koreas.

This year marks the 70th anniversary of Korea’s liberation from Japanese colonial rule and the subsequent national division. 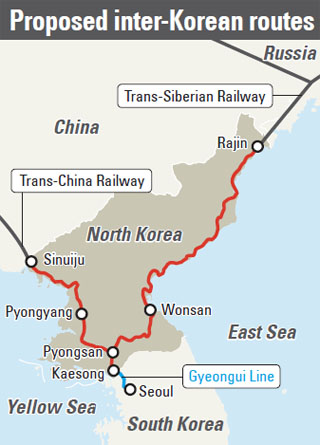 The ministries presented plans to open cultural centers in Seoul and Pyongyang at the same time, hold inter-Korean events to mark the anniversary and establish a law to provide the legal basis of peaceful unification.

The feasibility of many of the proposals, however, remain unclear as almost all require North Korea’s acceptance and cooperation.

Among the proposals presented Monday was an ambitious plan by the Ministry of Unification to restore the two Koreas’ western and eastern railways to operate trains from Seoul to the North Korean cities of Rajin and Sinuiju.

“Because this year marks the 70th anniversary of liberation, we decided that the timing is right to push forward this project,” said Unification Minister Ryoo Kihl-jae. “The two Koreas must reach an agreement first, but we believe this project can be carried out easily once Pyongyang accepts it.”

He said the Park government’s goal is linking the railways and operating trains in time for the Aug. 15 Liberation Day.

Because the Gyeongui Line is already linked and the government has enough data based on past surveys, Ryoo said he sees no particular problem in operating a train from Seoul to Sinuiju.

According to the ministry’s plan for trial operations of the inter-Korean railways, a train will depart from Seoul using the Gyeongui Line to reach the northeastern city of Sinuiju via Pyongyang.

On another route, a train will depart from Seoul to reach Rajin, located near the northwestern border with China. It will travel to the North using the Gyeongui Line but change lines at Pyongsan and go through Wonsan to the northeastern city of Rajin.

It was not the first time that inter-Korean railroad projects were discussed by the South Korean government. The two Koreas already restored the severed segments of the western Gyeongui Line and the eastern Donghae Line and operated trains in trial programs in May 2007. The two cross-border railways, however, were never put in actual use.

Other proposals announced Monday included a plan to appoint officials in each ministry to oversee tasks related to unification preparation. Plans to create inter-Korean agricultural complexes and expand health assistance to mothers and children as well as the globalization of the Kaesong Industrial Complex were also announced.

The Foreign and Unification Ministries also said they will put efforts into ways to dismantle the North’s nuclear programs and improve inter-Korean relations, but they presented no specifics.

Monday’s presentation prompted criticism that hasty ideas without substance were made public for the sake of briefing the president.

“Many of the ideas are abstract,” said Park Ihn-hwi, professor of international relations at Ewha Womans University. “They make us wonder how possibly the government can realize them. Because the government was overly ambitious, ministries appeared to have presented doubtful, unfeasible visions.”

“It’s not surprising that the ministries are carrying out plans to implement the leader’s will to prepare for unification this year,” said Koh Yu-hwan, professor of North Korea studies at Dongguk University. “But preparing for unification without a tangible vision or a specific direction and without keeping in mind the need to cooperate with the North, it will all end up as a castle in the air.”

Experts also said the government failed to present proposals attractive enough to lure Pyongyang to sit down at the negotiating table.

“The North has insisted that lifting the May 24 economic sanctions and resuming the Mount Kumgang tour program are pre-conditions for the talks, but the government failed to present any ideas on resolving either of those issues,” said Yang Moo-jin, a North Korea expert at the University of North Korean Studies in Seoul.

Even the unification minister admitted that the government is in a basic dilemma.

“For the various projects to succeed, the two Koreas must have talks,” Ryoo said. “The first step to resolve distrust and military tensions between the two Koreas is an inter-Korean dialogue, but the North is not responding to our talk offers, while it keeps making complaints, making us doubt its willingness for talks.”

Even the railway proposal, which the government explained in some detail, was received pessimistically.

“If the Park government is pushing forward the railway project as a one-time event, it can’t have any significance,” said Cho Bong-hyun, an analyst at the IBK Institute. “The North will accept the plan only when the proposal comes with the possibility of having further cooperative logistics and economic projects in the future.”

The Foreign Ministry presented an even more ambitious plan of operating an express train from Seoul to Europe via China, Mongolia and Russia. Its feasibility is also dependent upon the North’s acceptance.

“I cannot say whether the train will pass through the North or not, but we are pushing it forward as part of a bigger picture,” said Foreign Minister Yun Byung-se.

At the session, President Park urged the government to create an environment in which the North can respond to the South’s offer of talks, reiterating her position that starting government-to-government talks with the North is Seoul’s top priority.

She also urged the ministries to refrain from focusing on projects that won’t last.