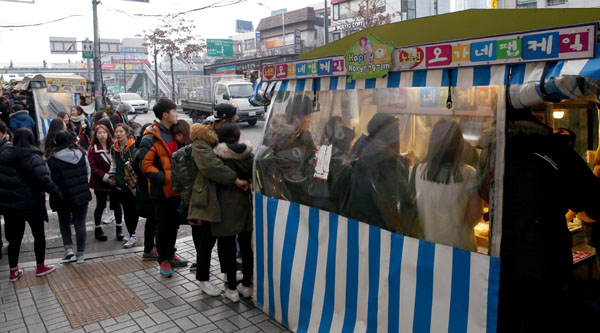 People wait in line at Ohgane Pancake (Oh Family Pancakes) to sample a pancake served with corn salad and sausage on top in the Noryangjin food alley in southern Seoul. By Oh Jong-taek

“I put this alley on my list of places to visit,” said one tourist, a 27-year-old woman. “It was popular on social media, and many students had posted photos of the Noryangjin food alley.”

Her first stop was the Noryangjin Fish Market, one of the largest open seafood markets in the country. She then crossed the overpass to make her way over to the food vendors.

The market has served as an increasingly popular attraction among Chinese tourists, whose numbers have significantly escalated over the past few years. The venue’s celebrity is due in part to its appearance on “My Love From the Star,” the hit Korean drama series, on which the show’s protagonist, Do Min-jun, buys echiura, or spoon worms.

The popularity of the fish market has naturally led to the rise in visitors, who have also flowed into the culinary street across the way.

“I like the food alley because I can taste that authentic Korean spiciness in many of the foods,” the 27-year-old tourist added. “What’s better is that it’s cheap.”

But the street’s real marker is its featured cup meal. A variety of dishes come served in this disposable cup and cost no more than 3,000 won ($2.70). Among the foods offered on the street are Vietnamese rice noodles; large handmade burgers; hotteok, also known as Korean pancakes; fresh fruit juices and coffee.

“I saw a lot of posts about the Noryangjin food alley on online food blogs,” said Park Do-won, who came there that day with her boyfriend from Gangneung, Gangwon. “We had a meal, dessert and coffee for around 10,000 won for both of us. It was a good deal.”

The Noryangjin food alley began to form in 1998, following the Asian financial crisis triggered the year before. Back then, vendors mostly sold tteok-bokki, rice cakes served in a spicy red pepper paste, or sun-dae, cow or pig intestines stuffed with noodles and various ingredients.

The cup meals, however, began to emerge in 2010, when students preparing for national civil servant exams, also known as the gosi, flocked to the area.

Competition among the 40 to 50 vendors in the food alley increased in line with the consumers, and the cooks eventually started to diversify the cup meals at cheaper prices.

The introduction of Turkish kebobs and Spanish churros in the alley over the past two years is also evidence of the street’s evolving nature.

Kim Tae-hwa, who began to sell bibimbap cup meals known as “bomb rice” in 2009, explained how the food should taste: “It should be spicy but at the same time tasty. So we don’t just use spicy sauce that is simply high in capsaicin [the component of chili peppers].”

He added that a business director from a franchise restaurant once came to the food alley and offered up hundreds of millions of won in exchange for the sauce recipe, which Kim denied.

Vendor Yang Yong, on the other hand, came up with the G-Zone Big Burger - a 4.5-inch burger. (“G-zone” sounds like “the best” in Korean.)

Yang used to sell chicken skewers as a street vendor in the Noryangjin area until avian influence, or bird flu, hit the country in 2008. The outbreak resulted in a spike in the cost of ingredients, leading him to turn his eye to handmade burgers.

Although there is a McDonald’s located nearby, Yang said he had confidence in his product.

“First, our burger is cheaper - just 2,500 won,” he said. “Second, we have a distinct and unique taste, which I believe is one of our competitive edges.”

To make the G-Zone Burger, Yang adds fried eggs and cactus sauce to the sandwich. As far as the patties, he gets fresh meat every morning from Yeongdeungpo Market in Yeongdeungpo District, southwestern Seoul.

She says the Vietnamese noodles are popular among female visitors who consider many of the cup meals to be too greasy or spicy.

Other Vietnamese restaurants have since popped up in her stead.

Other snacks, which typically go for about 1,000 won, are also a staple on the street.

Ohgane (Oh Family) Pancake is one. The pancake is served with corn salad with sausage on top and costs 1,500 won. A line typically forms before the vendor even opens.

Similarly, Ahn Jeong-deok runs a hotteok stand, where he sells 11 kinds of fusion hotteok for 1,500 won each. The Italian hotteok, for instance, contains mozzarella cheese, while the Nutella hotteok is made with the traditional hazelnut chocolate spread.

“We are the only hotteok place in the country that serves 11 different varieties,” he said.