Diplomat says a breakthrough in Korea-Japan ties is needed

Diplomat says a breakthrough in Korea-Japan ties is needed 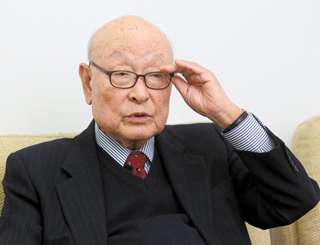 “Looking back, Korea’s foreign policy was aimed at finding solutions to survive by maintaining a balanced stance as the country was geopolitically surrounded by strong countries,” Gong said in an interview with the JoongAng Sunday.

After entering the Foreign Ministry in 1958, Gong served as a foreign affairs policymaker for 38 years until he became minister in 1996. The 83-year-old foreign policy veteran wrote the memoir to record what he saw and experienced in the field, adding that it is important to learn lessons from past experiences and apply them to present circumstances.

As for improvements in relations between Korea and Japan, Gong advised the Korean government to take a more mature stance. “Political leadership is needed to find a breakthrough,” he said. “The leaders of both countries should meet to resolve the current issues. It is all the more important. Korea needs to lead the conversation in a more mature manner.”

In 1992, Gong met with North Korean officials as the South’s chief foreign negotiator. When he was the minister, the North made its first attempt to operate a nuclear reactor.

“If we believe the South and North can’t meet without the North abandoning its nukes, there will be no way for conversations to progress between the two,” he said. “The South needs to persuade the North in various ways, including providing economic cooperation to bring them to the table.”

Gong’s memoir, titled “My Diplomacy Note,” is a summary of Korea’s foreign policies since the establishment of its first government. The first volume of the book ends on Oct. 26, 1979, when President Park Chung Hee was assassinated. The second volume will discuss the new military government of Korea and Gong’s stories as minister.

Q. What was the purpose of writing this book?

A. After stepping down from the post of minister, I taught history of Korean foreign policy at Dongguk University for about a year. My publisher and I were talking casually about foreign policy and we naturally worked together to release the book. The book links the data I kept for more than 10 years.

How did you first enter the Foreign Ministry?

I was hired by the Foreign Ministry in 1958 while I was in the Army. At the time, the South Korean government had grown after the war and needed to find diplomats among military interpreters. I was selected in that period and started my career as a diplomat. My first day as a diplomat began in the building where the Seoul Finance Center is now located. It was the Foreign Ministry’s headquarters back then. The ministry was quite small, with about 100 officials. I had to learn about diplomacy from the mouths of my superiors, because there were no reference books. So I always thought it would be a good idea to write one.

Among the presidents you served, who had the most talent in diplomacy?

Syngman Rhee. He was a very rare figure with deep insight into international politics. He highlighted the importance of taking an independent stance based on patriotism. In 1953, during the truce agreement, he actually opposed it and had a difficult time persuading the United States. Rhee called in all Korean military officers studying in the United States and proclaimed martial law. He didn’t even accept Dwight Eisenhower’s invitation to Washington to talk about the issue. Eisenhower wrote a letter to Rhee. In response, Rhee said he wouldn’t agree to the truce but would stay silent about it. And he asked for three conditions: a mutual defense truce, modernization of the Korean Army and for the U.S. Navy and Air Force to stay on the Korean Peninsula. The Korea-U.S. defense truce was hard-won.

What was diplomacy like during the April 19 and May 16 movements?

Despite the importance of diplomacy with the United States during the Chang Myon government, the Foreign Ministry kept a neutral stance. University students were favorable toward North Korea and pushed for student talks between the South and North. They also held protests in front of Panmunjeom. I was studying in the United Kingdom when the May 16 coup occurred. About a month before the coup, I spoke with Gen. Lee Hyung-geun, who visited me to talk about the rumors. He said a coup would be impossible because the Korean military was divided. But in a few days, it happened.

The United States was planning to ignore Park Chung Hee, who led the coup. Were there difficulties in terms of diplomatic relations?

The United States made an attempt to suppress the coup by force in the early stages. It tried to mobilize the 8th U.S. Army, but Yun Po-sun didn’t agree to it, saying allies shouldn’t take violent action.

What was Park’s diplomatic philosophy?

I had frequent chances to see him face to face because I was an interpreter for him. I remember that Park said, “Let our future generations judge our decisions made today” regarding normalization of relations with Japan. He seriously said, “This won’t happen unless we do it now.” At the time, it was inevitable that Korea would sign an agreement with Japan amid decreasing aid from the United States. I think this event was the most proud achievement in Korean foreign policy history. We were able to build the Gyeongbu Highway and Posco with the money from Japan.

As a former Korean ambassador to Japan, what is your opinion on easing the tension between the two nations?

Leaders shouldn’t pay too much attention to voters. When things are in a deadlock, the solution is to break it. There needs to be a big breakthrough. President Park Geun-hye says the sex slave issue should be resolved first, but I think this issue can be solved only after she meets her Japanese counterpart. Presidential summits don’t need a tangible outcome. They need to mull over a number of ways to come up with breakthroughs.

What about the criticism that we are giving in?

Would you say that Japanese people are yielding to us if they first suggest talks? We should have the attitude that listening to each other is understanding. Japan has made several apologies about its past. We need to design a plan based on what they have said. In 1998, Keizo Obuchi apologized for Japan’s colonization in a summit with Kim Dae-jung. Kim appreciated it and suggested moving on. While Japan reflects, Korea should look to the future. We can’t wait until the Abe administration apologizes. Discord between Korea and Japan can incur losses to both nations and the United States.