Cavaliers are finally living up to great expectations

Cavaliers are finally living up to great expectations 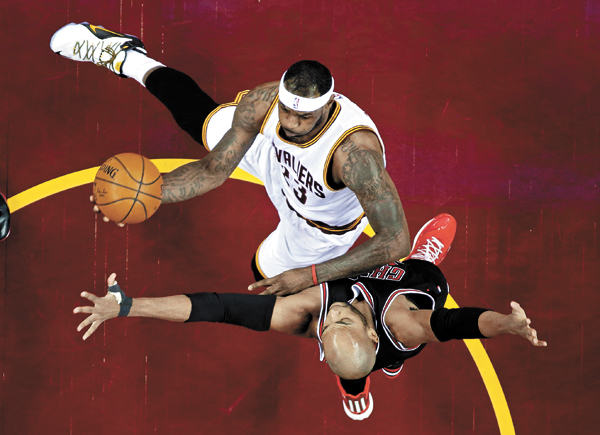 LeBron James of the Cleveland Cavaliers shoots over Taj Gibson of the Chicago Bulls in the first half of their game on Monday, local time, in Cleveland. [AP/NEWSIS]

The pieces, old and new, are beginning to fit together.

It’s taken some time, and there’s a long way to go. But the critiqued and criticized Cavaliers are starting to play like the team they were supposed to be.

James scored 26 points and J.R. Smith added 20 as the Cavs, remodeled by two trades in recent weeks, entered a favorable portion of their schedule with their third straight win.

Back home after salvaging a drama-filled trip out West with two wins in Los Angeles, the Cavs had little trouble with the Central Division-leading Bulls. Cleveland opened a 25-point lead in the third quarter and handed Chicago its fourth loss in five games.

Jimmy Butler scored 20 and Derrick Rose 18 for the Bulls, who played their third game in a row without starting center Joakim Noah (sprained ankle). Chicago has dropped six of eight, and Coach Tom Thibodeau doesn’t like what he’s seen from his team lately.

“We’ve got to decide when enough is enough,’’ a disgusted Thibodeau said. “We’ve got to get better. It’s really that simple. The way we’re playing is not acceptable, so we have to change it.’’

Smith made six 3-pointers, Kyrie Irving scored 18 with 12 assists and Kevin Love added 16 points and 12 rebounds for the Cavs, who have temporarily quieted talk that they’re not title contenders and first-year Coach David Blatt is in trouble. Cleveland can improve its record with three more home games this week and nine of its next 12 in Quicken Loans Arena.

“This was our best defensive game of the year,’’ said Blatt, who dismissed some recent negative analysis of his team. “We have a long way to go, but the ship is sailing in the right direction.’’

Cavs center Timofey Mozgov scored 15 with 15 rebounds in his first home game for Cleveland since being acquired in a Jan. 7 trade from Denver.

Playing his fourth game since missing eight with a strained back and knee, James didn’t have to carry the offensive load as Cleveland’s other starters combined for 69 points. And the Cavs played with better energy on defense, which hasn’t been the case most of the season.

Leading by 15 at halftime, the Cavs started the third with a 10-2 run to open a 23-point lead. Love and Smith drained 3-pointers in the spurt that wobbled the Bulls. Chicago got to 90-78 in the fourth, but James scored on a drive and Smith drilled a 3 to put the Cavs back in control.

“If we don’t have that edge, we’re going to continue to get our butt whupped,’’ said Rose, who sat out the fourth quarter. “Basketball should be fun. It seems like we’re overthinking.’’

Chicago has a tough stretch ahead with games vs. San Antonio, Dallas, Miami and Golden State. “We’re halfway through the season,’’ Thibodeau said. “Somehow the notion that it’s OK, we’ll be all right - no, no, it doesn’t work like that. This is what we have. It’s on us to figure it out. No one’s coming in to save the day. We’ve got to find the answer.’’