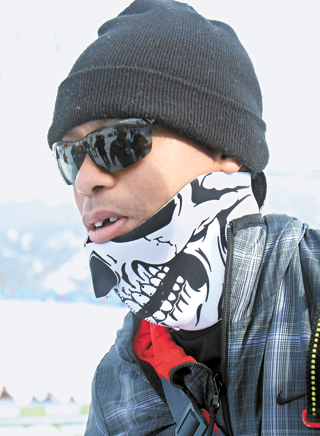 Tiger Woods has another reason not to like cameras - his agent said it cost him a tooth.

Woods made a surprise visit to Italy on Monday to watch girlfriend Lindsey Vonn capture her record 63rd World Cup race. The photo that generated all the buzz was Woods missing his front tooth.

The culprit, according to his agent, was a camera.

“During a crush of photographers at the awards podium at the World Cup event in Italy, a media member with a shoulder-mounted video camera pushed and surged toward the stage, turned and hit Tiger Woods in the mouth,” Mark Steinberg of Excel Sports said in an email. “Woods’ tooth was knocked out by the incident.”

Race organizers said this was not reported to them. They added that Woods did request extra security and a snowmobile to exit the finish area, and organizers met both requests.

“I was among those who escorted him from the tent to the snowmobile and there was no such incident,” Nicola Colli, the secretary general of the race organizing committee, said. “When he arrived he asked for more security and we rounded up police to look after both him and Lindsey.”

Woods had been wearing a scarf with a skeleton pattern over the lower part of his face, sunglasses and a stocking cap. The photo was taken when the scarf was lowered.

Woods first showed up in the athletes’ area when Vonn’s father, Alan Kildow, escorted him in shortly after Vonn took the lead. The golfer then surprised Vonn and gave the skier a hug.

Steinberg was traveling and did not say when Woods would have the tooth replaced. Golf’s biggest - and most photographed - star returns to competition next week in the Phoenix Open, and his smile is sure to produce a stream of shutters from the cameras.

Woods has a long history with cameras, often frustrated when shutters go off in the middle of his swing. One notable episode came during the Skins Game in 2002 when a corporate photographer clicked his camera as Woods was hitting a shot from the bunker on the final hole. His former caddie, Steve Williams, took the camera and set it on a steep bank of a pond so that it tumbled into the water.

Another time, Woods was on the verge of his first bogey-free tournament at a World Golf Championship in Ireland when a camera clicked at the top of his tee shot. He made bogey, but still won.