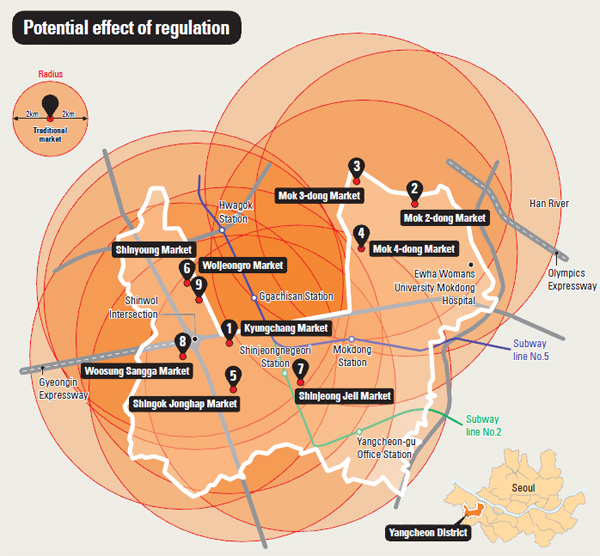 There are more than 210 traditional open-air markets in Seoul, nine of which are in Yangcheon District in southwestern Seoul. If pending regulations are approved by the National Assembly, no outlet malls can be built in the district.

Retail giants were put on edge last month when new regulations on outlet malls were proposed in the National Assembly.

Lawmaker Lee Jong-kul of the opposition New Politics Alliance for Democracy (NPAD), also a member of the National Policy Committee, suggested in December that outlet malls be banned from operating within two kilometers (1.2 miles) of a traditional market.

The bill hit a nerve among retailers such as Lotte and Shinsegae because they are betting big on outlet malls as a new source of income.

Once-loyal customers of major department stores - Lotte, Hyundai and Shinsegae - have been lured away by the promise of lower prices at outlet malls where off-season clothes are cheaper.

Industry analysts have warned that the department store market is saturated, with annual sales growth in the sector stuck at 2 to 4 percent for the past three years.

“If we take into account the increase in consumer prices, the sales growth is considered negative,” the source said.

Lotte, Shinsegae and Hyundai all either have outlet malls under construction or in the planning stages. All three are looking to Gyeonggi, the suburban metropolitan area near Seoul, because of its relatively cheap real estate. The region guarantees less competition than Seoul but is close to the city.

Lotte Group, the country’s No. 1 retailer, will finish building outlets in Gwanggyo New City in Suwon, Gyeonggi, and Jinju, South Gyeongsang, this year and will open one in Yangju, Gyeonggi.

Shinsegae also has high hopes for its outlet shopping malls. The company is looking to finish building a complex in the city of Siheung, Gyeonggi, in 2017 and will build two more in Uijeongbu, Gyeonggi, and Naju, South Jeolla.

When it announced a record-high annual investment of 3.35 trillion won ($3.1 billion) on Monday, Shinsegae said that a large chunk will be spent on building outlet malls.

In its long-term plan, the group also made it clear that the hallmark of its future business strategy will lie in outlet malls.

Hyundai Department Store is lagging behind the two competitors in outlet businesses. It plans to open a discount mall in Gimpo, Gyeonggi, next month, which is directly affected by the proposed bill in the National Assembly.

“I don’t know what we will do if the bill is passed,” said a representative of Hyundai Department Store. “We have no idea as to what we should do for the outlet malls still under construction if the mall is close to a traditional market.”

Hyundai is not alone in its frustration.

“Traditional markets are scattered across the region,” said a Shinsegae official. “So the regulation will really damage us if it’s passed.”

Still, it is difficult to push their own concerns over that of smaller markets.

Instead, the retailers are trying hard to promote the fact that their new malls contribute to the local economy. “We hired 200 Gwangmyeong citizens at the outlet in Gwangmyeong,” a representative of Lotte Department Store said.

A source at Hyundai stressed that the items sold at outlets don’t overlap with products for sale at traditional markets.