Santa Fe rides high in the saddle in U.S. market

Santa Fe rides high in the saddle in U.S. market 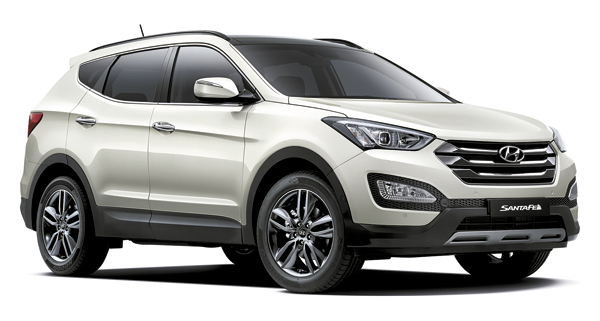 According to Hyundai Motor and its sister company Kia Motors Tuesday, 17 models sold more than 100,000 units in a single market globally, which was three more than in 2013.

The company said selling more than 100,000 units of one model in a single market is a milestone for any model that wants to be a mass-market hit.

The 17 models included the Santa Fe in the United States, the Sonata sedan in the domestic market, the Mistra sedan in China and the Grand i10 in India. 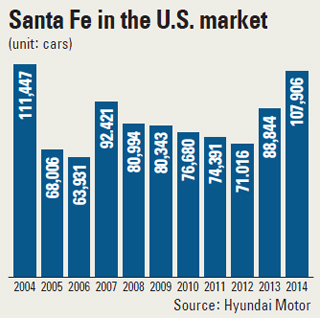 The company said a total of 107,906 Santa Fe SUVs were sold in the United States, and they were particularly popular in the southern states of Texas, Florida and Alabama. “People in the southern regions generally favor bigger-sized cars than people in northeastern regions,” said Hwang Kwan-sik, spokesman for Hyundai Motor. “They like the Santa Fe’s size and its performance, which makes it suitable for outdoor activities.”

Beyond the Santa Fe, two Hyundai vehicles and three models by Kia Motors including the Sorento SUV sold more than 100,000 units in the United States.

The SUV market in the United States has been booming lately thanks to falling oil prices. In the United States, gasoline is averaging $2.10 per gallon, $1.20 less than a year ago. That’s one of the reasons the Santa Fe sold more in 2014 than it has in a decade.

Once again, China was one of the biggest markets for Korea cars and there were seven models that sold more than 100,000 units each last year, the most in a single market.

The most popular model in the country was the small sedan Langdong, which sold 252,338 units.

In the Brazilian market, one of the biggest markets in South America for Hyundai Motor, the hatchback model HB20 sold 179,327 units.

It is a model the company has developed in their Brazil factory to meet the country’s antipollution regulations. The model can be fueled by ethanol or gasoline. In Russia, Hyundai Motor’s small Solaris sedan sold 114,644 units.

“If one model sells more than 100,000 units, the company’s overall brand recognition improves among consumers, eventually boosting sales for other models,” said Hwang. “We will try to develop more cars that can attract consumers in a particular region to boost our global sales.”