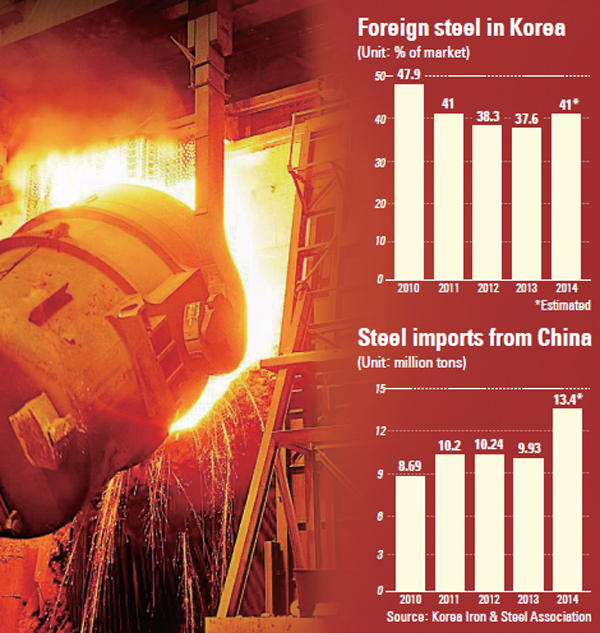 Korea’s steel market is feeling the pressure from China, according to a report released Tuesday by the Korea Iron and Steel Association (KOSA), which showed that its steel and iron imports from the mainland jumped to a six-year high in 2014.

In preliminary data, the association recorded that Korea imported 13.4 million tons of iron and steel products from China in 2014, up 34.9 percent from a year earlier. This is the highest since 2008, when the country bought 14.3 million tons from China.

Powered by the Chinese, the nation’s overall steel imports jumped 17.3 percent year-on-year to reach 22.74 million tons in 2014, KOSA said. As a result, the market share for foreign steel products is estimated to gain 3.5 percentage points to reach 41 percent in 2014 - the same as in 2011.

“Among major steel-producing nations, no country has ever had foreign steel taking a domestic market share of around 40 percent for a decade,” KOSA said in a statement. “The threat to the local steel market is increasing.”

According to the association’s data from 2013, foreign steel’s market share in the United States was 31.7 percent, while Japan’s was 8.3 percent and China’s was just 2.1 percent.

KOSA added that although the market share of foreign steel in 2014 was lower than in 2008 - a record high at 49.4 percent - the negative impact on the local market was much greater this time.

“In 2008, the problem was domestic, in that we needed steel, but this time it stemmed from an oversupply of steel production in China,” it said.

Chinese steel makers exported an estimated 85 million tons of steel products in 2014, it added, which is a 33 percent increase from the previous year.

However, imports of H-beam steel increased again from November and finally reached a record high of 971,000 tons in 2014, which is a 15.2 percent increase from 2013. KOSA data showed foreign products take up more than one-third of the market share for products like steel wool (48 percent), H-beam steel (36 percent) and hot-rolled coil (36 percent).

“The market share of foreign products shows that it is shaking the foundation of the local steel market,” KOSA said.