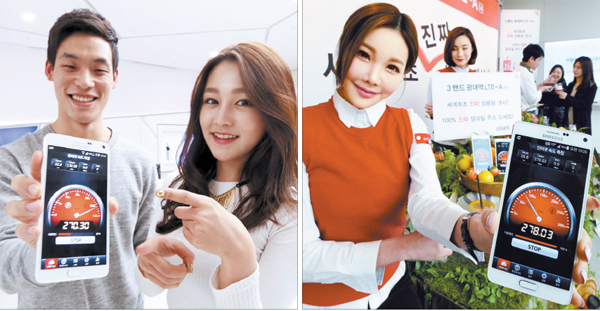 KT and LG U+ have accused SK Telecom, the nation’s largest mobile carrier, of providing illegal subsidies of up to 500,000 won ($459) last weekend.

SK Telecom has denied it.

The government has set the subsidy ceiling at 300,000 won.

“Despite continuous efforts by the Ministry of Science, ICT and Future Planning and the Korean Communications Commission [KCC] to normalize the mobile communications market, SK Telecom led the market to overheat since last Friday by providing subsidies of more than 450,000 won on the iPhone 6 and Galaxy Note 4,” said KT in a press release. “SK Telecom continued illegal operations until Monday and as a result stole 4,850 subscribers from KT on Monday alone.”

Mobile carriers must post the amount of their subsidies online every Saturday, and KT accused SK Telecom of offering the new, higher Saturday subsidies on Friday, which would be a violation of the Mobile Device Distribution Improvement Act.

“Data that KT has submitted as evidence comes from only a few retailers,” said Chung Wook, spokesman for SK Telecom. “It does not make sense to charge SK Telecom with illegal subsidies just because some stores deviated from the standards. The market has been stabilized and SK Telecom has been operating normally. Last weekend, we raised the amount of official subsidies on 10 devices and lowered the launch prices of four smartphones.”

SK Telecom explained that unlike its retail stores, independent smartphone stores are difficult to manage.

“In addition, LG U+ also stole subscribers from KT during the same period, but KT did not mention LG U+,” he said. “I can only say that KT is taking aim at SKT.”

“We told them to stop doing what they are doing now,” said Chang Dae-ho, a spokesman for the KCC. “If we confirm wrongdoing, we will punish them with penalties under the current mobile law.”

In December, SK Telecom and KT teamed up to blame LG U+ for heating up the mobile communications market with illegal subsidies at a meeting hosted by the KCC. But the alliance did not last long.

This time, SK Telecom, the No. 1 mobile carrier in Korea, and KT are going after each other.

Meanwhile, SKT, KT and LG U+ currently are engaged in a legal dispute over the use of the phrase “world’s first commercialization of 3-band LTE-A.”

LG U+ on Jan. 12 also filed for an injunction in Seoul Central District Court requesting a ban on SK Telecom’s TV commercial.