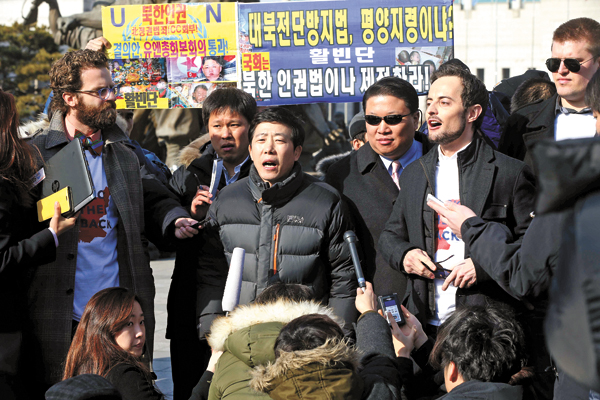 Park Sang-hak, head of Fighters For a Free North Korea, center, speaks at a news conference Tuesday. Park said he and his supporters will send copies of a Hollywood movie depicting an assassination attempt against the North’s leader Kim Jong-un unless Pyongyang accepts Seoul’s offer for talks. By Oh Jong-taek

A defector who now works as an activist threatened Tuesday to send DVDs of the Hollywood comedy “The Interview” over the border by balloons unless Pyongyang accepts Seoul’s offer for dialogue.

Park Sang-hak, head of Fighters For a Free North Korea, held a press conference Tuesday afternoon with members of the Human Rights Foundation, a U.S. advocacy group, and urged Pyongyang to accept Seoul’s offers for talks, including a proposal to hold a reunion of families separated by the 1950-53 Korean War next month.

“North Korea’s integrity should be questioned because it demands the South stop joint military exercises with the United States in return for the South’s proposal for talks,” Park said.

Park said he accepts the South Korean government’s request to refrain from sending anti-Pyongyang leaflets over the border to allow it time to improve inter-Korean ties.

“I will cease those activities until the Lunar New Year holidays,” he said. “Now is the time for the North to respond to the South’s offer for dialogue.”

If the North doesn’t start talks with the South, balloons carrying DVDs and USB memory sticks containing “The Interview” will be sent across the border, Park warned. The satirical movie depicts an attempt to assassinate North Korean leader Kim Jong-un. The U.S. government says North Korea hacked Sony Pictures last year out of anger over the movie, although North Korea denies it.

Thor Halvorssen, founder of the Human Rights Foundation, said he is contemplating more effective ways to send anti-Pyongyang materials to the North. Using drones instead of balloons is a possibility, and discussions are ongoing with defectors’ groups, Halvorssen said. Halvorssen said his goal was to send 100,000 DVDs of “The Interview” to the North this year.

The news conference took place after Park and his supporters sent 100,000 leaflets critical of North Korea from Paju, near the western inter-Korean border, around 11 p.m. on Monday. Park said he had prepared 500,000 leaflets but only sent 100,000.

After defecting to the South in 2000, Park started dispatching leaflets over the demilitarized zone in 2004. Earlier this month, Pyongyang issued a death threat against him after he made public a plan to send copies of “The Interview.”

Last week, a senior official from the Ministry of Unification met with Park and asked him to desist from sending the leaflets.

President Park Geun-hye also said Monday morning that the government must create an amicable mood to persuade North Korea to accept its talk offers. The activist, however, sent the leaflets later that night.

A ministry official said Tuesday that the ministry found out about Park’s latest leaflet launch on Monday night after he finished sending them at the border.

“On Thursday, a senior official already gave detailed explanations to Park and asked him to make a wise decision,” the official said. “We believe this method of persuasion is appropriate.”

Pyongyang has reacted furiously to the leaflets and fired shots at the balloons last year.