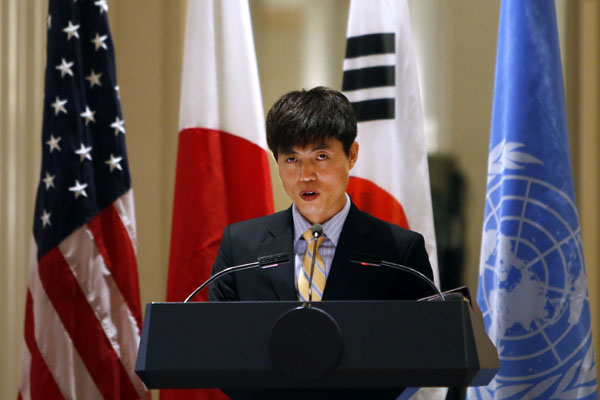 A prominent North Korean defector who fled a prison camp and became the face of international efforts to hold the country accountable for widespread human rights abuses has changed important parts of his life story.

Author Blaine Harden says in a statement on his website that he has pressed Shin Dong-Hyuk to “explain why he had misled me” during interviews for Harden’s book on Shin, “Escape from Camp 14.”

North Korea tried to discredit Shin late last year as it fought a UN General Assembly resolution that backed the findings of a groundbreaking UN commission of inquiry into Pyongyang’s human rights abuses.

Human rights groups say the UN inquiry was based on interviews with scores of North Korean defectors. “Its findings are still valid,” said Brad Adams, Asia director for Human Rights Watch. The organization last year gave Shin an award for extraordinary activism and said he is “regarded as the single strongest voice on atrocities taking place in North Korea.”

Shin was traveling and could not be reached for comment. He was expected to arrive in Seoul from the United States on Monday afternoon, said Greg Scarlatoiu, executive director of the Washington-based Committee for Human Rights in North Korea.

“Every one of us have stories, or things we’d like to hide,” Shin said in an apology for the inaccuracies in recounting his past in his latest Facebook post, giving few details. He said he may or may not be able to continue his work of trying to eliminate North Korea’s political prison camps but urged others to keep fighting. “These will be my final words and this will likely be my final post.”

Shin’s story originally drew widespread attention because he said he had lived in a high-security political prison camp in North Korea from his birth until his escape through an electrified fence. He describes himself on Facebook as “the only known person born in a North Korean prison camp that escaped and survived to tell the tale.”

Harden has described Shin as a reluctant narrator, and a sometimes unreliable one. “In writing this book, I have sometimes struggled to trust him,” Harden wrote in the introduction to his book. “He misled me in our first interview about his role in the death of his mother, and he continued to do so in more than a dozen interviews. When he changed his story, I became worried about what else he might have made up.”

Harden’s statement says he passed along Shin’s new information to The Washington Post, his former employer. Its report over the weekend said Shin now says he was transferred around the age of 6 to a lighter-security prison camp with his mother and brother. It was there, not the harsher camp, where he informed authorities about an escape attempt by his mother and brother. For that, they were executed. He now says he was later transferred back to the harsher camp.

“The fundamental building blocks of his story have remained the same, although I am fully aware of the differences between [the two camps],” Scarlatoiu said Sunday. “Still, born and raised in a camp, he was subjected to forced labor, induced malnutrition and torture. He informed on his mother and brother, who were executed. He escaped from the camp, and lived to tell his story. None of that has changed.”

Shin’s earlier account helped drive the international effort to hold North Korea accountable. He and another defector met with then-UN human rights chief Navi Pillay just days before she called for the commission of inquiry in early 2013. “Their personal stories were extremely harrowing,” she said at the time.

North Korea’s government denies the existence of the harsh political prison camps, and human rights groups and others rely on both information from defectors and satellite images for information. The North Korean government did not allow the UN commission of inquiry to visit the country for its work.

A spokesman for North Korea’s mission to the United Nations had no immediate comment.

The commission of inquiry also sent a letter to leader Kim Jong-un warning him that he could be held accountable. AP