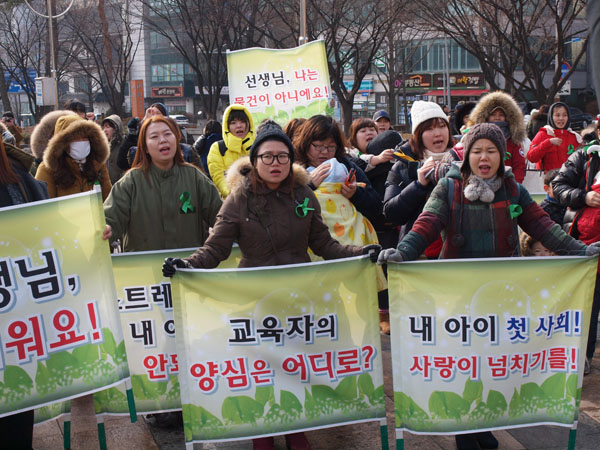 Members of an Internet-based community mostly consisting of mothers rally in a square in front of Incheon City Hall on Monday to condemn the day care center in Incheon where one of the teachers was found to have physically abused a 4-year-old child. They also demanded the local government come up with appropriate measures to prevent child abuse. [NEWSIS]


Amid ongoing controversy over child abuse at day care centers, the ruling Saenuri Party and the main opposition New Politics Alliance for Democracy (NPAD) each came up with task forces to protect children from harm by their caregivers.

However, the two parties appeared to have different opinions on how to deal with the issue.

The Saenuri Party’s special committee on preventing child abuse held its first meeting on Monday, when it announced that it is planning to promote a bill in which day care centers equipped with CCTV cameras would be authorized as secure facilities, while those without would be afforded governmental support to install them.

“The human rights of children are just as important as those of day care teachers,” said lawmaker Shin Yee-jin, a committee member. “Setting up CCTV cameras at day care centers won’t allow us to look at every corner of each facility, but at least they will make teachers think about their behavior.”

The police also held a press briefing on Monday, during which they also focused on the idea of security footage and announced that they would disclose a list of day centers that refused to submit their tapes.

“We will not just announce the list but also seek warrants for footage if child abuse is suspected,” said Commissioner General Kang Sin-myeong of the National Police Agency. “Given that CCTV usually saves data for 30 days, nurseries that do not have records on some days will be questioned by authorities.”

Day care centers are not legally bound to disclose security footage, although the police said they do plan to personally visit day care centers to request the clips.

But lawmakers from the main opposition NPAD insisted on a different approach, and opposed the Saenuri Party’s plan to set up more cameras.

“Establishing CCTV at day care centers cannot be the fundamental solution,” Nam In-soon, a member of the main opposition party’s new task force on child abuse prevention, said at a meeting Monday at the National Assembly. “Investigating CCTV footage even when the teachers are not involved in crimes would make the issue even more controversial. Punishment and regulation does not fundamentally solve the problem.”

NPAD floor leader Woo Yoon-keun added that a better day care service was the proper solution. “Given that day care teachers are working so hard, the environment of nurseries should be improved,” he said.

Also on Monday, the Samsan Police Precinct announced that it had finished questioning the parents of at least 10 children who were believed to have been physically abused by a 25-year-old teacher surnamed Kim at a day care center in Incheon.

They said they would now personally talk with each child. Kim will be summoned later this week for further investigation.

The 25-year-old, who has worked at the center since February 2013, is suspected to have hit or roughly shoved about 10 children since December, according to CCTV footage at the center.