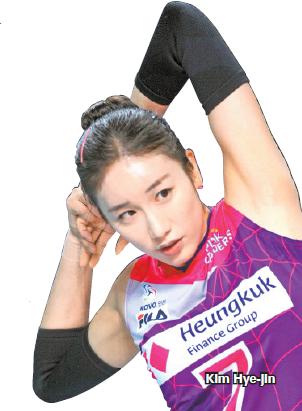 The country’s female volleyball league has become more popular since rules were recently changed to allow players to wear accessories and makeup, and some have been standing out for their style.

Destinee Hooker of Hwaseong IBK Altos is one example. The 6-foot-4 American has drawn attention with her eye-catching hairstyles. She usually ties her wavy hair back in a ponytail, but also puts it into a bun, an afro, or pigtails that resemble Mickey Mouse ears. Wearing hair ribbons has become her trademark, and for Christmas, she piled up her hair and shaped it into a Christmas tree with a red ribbon.

Kim Hye-jin, captain of the Incheon Heunguk Life Insurance Pink Spiders, is another star, not just for her performance but also for her style and team spirit. The “Pink Star” has become famous among volleyball fans for wearing pink lipstick, earrings and hairpins.

Lee Jae-young of Heunguk Life and her twin sister Lee Da-young of Suwon Hyundai E&C Hillstate became famous rookies this season. They made headlines when they were picked for the V-League’s All-Star team in their first season, but fans are also fond of their looks. The two sisters were nearly identical when they were drafted in September, but Jae-young now has a short sporty haircut and Da-young has kept her hair long.

Volleyball players were only recently allowed to start showing their style on the court. Female volleyball players in the 1980s and 1990s were prohibited by their coaches from doing their hair and could not even apply basic skin products. Uniformity was important and all players had short hair tied back in a ponytail.

“We had tacit rules,” said SBS volleyball commentator Lee Do-hee, who was a member of the women’s national volleyball team during the 1994 Hiroshima Asian Games. “We couldn’t let our hair grow long and we used to be rebuked for wearing makeup.”

The rules on appearances took a major shift in the past few years when all volleyball matches started to be aired live on television. Reaching a wider audience, the players wanted to appear stylish, and fans naturally became more interested in their looks. So the restrictions were loosened so that the women on the court can wear small accessories and basic makeup.

Lee said that it was a change for the better.

“Improving their appearances is also a way for them to promote themselves as professionals,” she said.

But not all fans are happy with the players’ looks. When Heungkuk Life, which was near the top of the league earlier in the season, dropped to fourth place, it led fans to blame the players for paying too much attention to their appearances instead of the game.

Coaches who are former players are also not familiar with this new trend, but they are gradually changing their perspective.

“I was surprised when Hooker showed up with Christmas tree hair, which made me worry about her performance,” said Manager Lee Jung-chul of IBK Altos. “But she played even better and lifted the team to win that day. It is good to see the players doing well in games and trying to look stylish at the same time.”