2014 a boom year for new businesses

2014 a boom year for new businesses 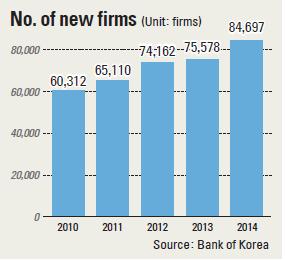 The number of new businesses in Korea exceeded 80,000 for the first time last year, the greatest ever, according to a report by the Bank of Korea on Wednesday.

The report said 7,889 firms registered with courts in December alone, 1,242 more than in November and the most since July.

“The reasons include increases in the number of self-employed businesses with the retirement of baby boomers and start-ups by young people boosted by the government initiative,” said a BOK official.

The rate of unpaid bills was 0.17 percent in 2014, a 13-year high. The rate had fallen since September, but shot up in December due to bankruptcy filings in provincial areas.

“The number of bankrupt businesses or new ones doesn’t affect the rate. The rate is calculated based on value of the bills,” said the official. “It went up last year because of bills that neared their maturities for bankrupt STX and Tongyang Group.”

Meanwhile, the aggregate of loans issued by commercial banks for business owners, including self-employed people, hit 209.3 trillion won ($193 billion) as of December, up 18.8 trillion won from a year earlier, the central bank data showed.

The growth represents the most in seven years.

Loans to owners of small businesses account for about 50 percent of the nation’s total household debt, according to the BOK data.