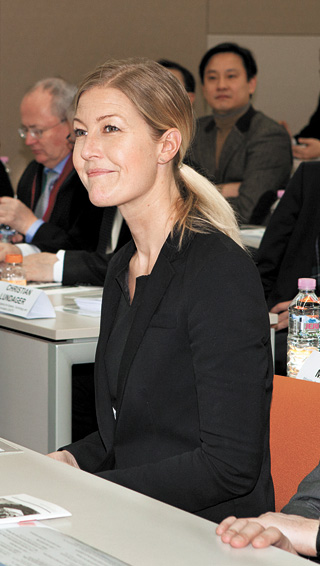 Denmark’s minister for higher education and science, who arrived in Korea earlier this week to discuss the expansion of bilateral collaboration in technological innovation, business and education, said Tuesday during an e-learning seminar that the partnership will likely result in a new generation of learning tools.

“Korea is one of the most technologically developed countries in the world, and Denmark is a leader in coming up with new learning strategies,” said Minister Sofie Carsten Nielsen, adding that strengthening ties will “improve efforts to find new digital media” for online learning.

Tuesday’s Korean-Danish e-Learning Seminar at Hanyang Cyber University in Seongdong District, northern Seoul, was held on the third of Nielsen’s five-day visit to Korea by a delegation that included Danish companies in the e-learning and sound technology sectors and executives from leading Danish universities.

In the days preceding the gathering, Nielsen met with key domestic figures including Hwang Woo-yea, deputy prime minister and minister for education; Choi Yang-hee, minister for science, ICT and future planning; and Han Jung-wha, administrator of the Small and Medium Business Administration.

Thomas Lehmann, the Danish Ambassador to Seoul, also attended the e-learning seminar, which focused on present and future online education cooperation between Korea and Denmark.

The meeting featured presentations on e-learning led by speakers from both sides, including Niels Kjaer Frey, a special consultant from Statsbiblioteket, also known as the State and University Library.

Frey, who acknowledged that it was his first time to Korea, said he hoped his visit would be a “starting point” in building partnerships with Korean universities and organizations in sharing knowledge. He also introduced a flagship project called Lektier Online.

Launched in 2009 and funded by the Danish government, the educational service provides free live online sessions to teenagers living in disadvantaged areas. Lessons are taught by college student volunteers who offer one-on-one tutoring.

The program’s success has been evidenced by its growing number of participants. It currently has 20,000 users, 500 volunteers, six call centers and provides 100 lessons a day, according to Frey.

But it’s more than the digital techniques or online videos in Lektier Online that helped the program reach that level, he said.

“Users say, ‘I can put the same question down five times,’” Frey said, unlike in school, where many students refrain from asking questions they think might be considered stupid.

In fact, when it comes to e-learning, it’s “20 percent technology and 80 percent learning,” he stressed.

Total e-learning expenses reached some 2.86 trillion won ($2.63 billion) in 2013, up from 2.6 trillion won a year earlier, according to the Survey of Korean e-Learning Industry 2013, which was jointly conducted by the National IT Industry Promotion Agency and the Ministry of Trade, Industry and Energy.