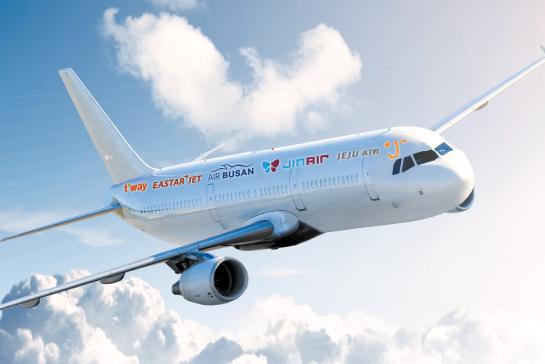 On Tuesday, Jeju Air employees were busy taking phone calls from consumers after its website went down due to heavy traffic.

To celebrate its 10th anniversary, the nation’s largest low-cost carrier (LCC) announced that it would hold a special promotion with discounts of up to 95 percent on some tickets from March to November. Including the fuel surcharge and airport fees, a one-way ticket from Incheon to Tokyo cost just 68,000 won ($63). The company was also offering discounts to fliers who only bring carry-on luggage.

The promotion was scheduled to start at 5 p.m. Tuesday and last until 6 p.m. on Thursday, Jan. 29, but with so many consumers logging onto the website to book tickets, the site became inaccessible two hours before the event began.

“We expanded our server capacity before the event, but we didn’t expect this many people to visit our website,” a Jeju Air spokesman said. 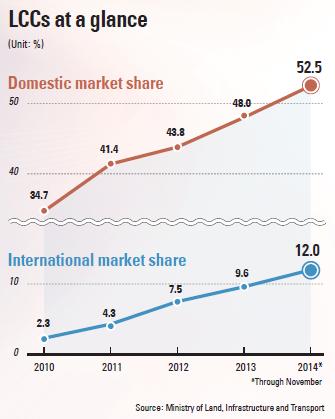 Jeju Air’s discounts are just one example of how LCCs are attracting customers. Domestic low-cost airlines are not only bringing in consumers with cheap tickets but also adding more routes to expand their presence.

But how far can they go?

All five local LCCs are also expected to post an operating profit for last year and some had already reached their annual goal by the third quarter, according to a report from Shinhan Investment Corporation. 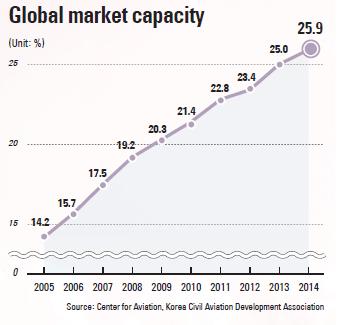 “The Korean LCC market share in international passenger transportation is about 13 percent, but in other countries, LCCs have about a 20 to 30 percent market share, meaning that Korean LCCs have enough room to expand,” said IM Investment & Securities analyst Joo Ick-chan. “In Asia’s air transportation market, where most flights are one to four hours, consumers value cheap prices more than service quality.”

And now the cheaper price of oil is giving an additional boost to local LCCs. According to energy information provider Platts, the average price of jet fuel in Asia and Oceania was $65 per barrel as of Jan. 9, a 46 percent year-on-year drop.

Although plunging oil prices is good news for all air carriers, industry watchers said it will benefit LCCs more because their oil costs are slightly higher than those of full-service carriers, accounting for about 35 to 40 percent of their total costs.

“It is true that the average fleet age of LCCs is older than full-service carriers, but with the oil price drop, fuel efficiency isn’t a big advantage anymore,” said Hong Jin-joo, an analyst at Shinhan Investment Corporation.

Due to the promising business environment, Korean LCCs are not shying away from expanding and invading the territory of full-service carriers. Jeju Air is preparing to list on the stock market in the first half of the year, and Air Busan, in which Asiana Airlines has a 46 percent stake, is also reviewing its plan to debut on the bourse. Asiana is working to establish another LCC based in Seoul or Incheon.

In terms of upcoming route expansions, the spotlight is on Jin Air, which will start flying from Incheon to Hawaii this year, the longest route offered by a local LCC. The affiliate of KAL bought 355-seat B777-200ER aircraft last year to fly the route and will acquire two more this year. 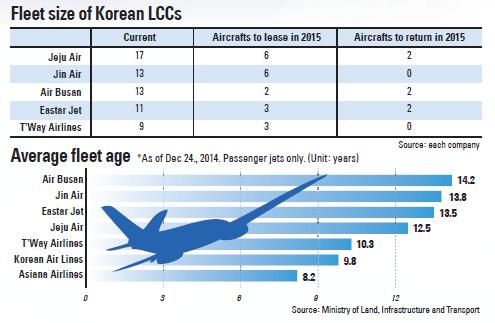 “Considering that passengers’ satisfaction on flights of over three hours is lower than that of flights under three hours, it’s an enormous business experiment for the LCC to start the Incheon-Hawaii route, which takes about 10 hours of flying time,” Hong said. “Jin Air’s success on the Incheon-Hawaii route in 2015 will determine the future direction of other local LCCs’ plans in entering the long-haul business.”

Korean LCCs are also likely to keep pushing flights to China. Industry observers said that although China is close, it has been difficult for them to launch flights to major cities because the two countries do not have an “open skies” accord.

However, Jeju Air is set to break through the barrier by operating a Daegu-Beijing route starting next month, making it the first local budget airline to fly to the Chinese capital.

“China is the market with the highest potential to grow,” Hong said. “There are concerns about overheated competition in China, but Chinese LCCs are busy meeting domestic demand.”

Affordable domestic carriers want to keep their momentum from last year, but there are still problems that must be solved. Since LCCs use older airplanes and have fewer aircraft than bigger carriers, they are in danger of being forced to delay flights.

According to data from an audit by the National Assembly last year, Korean air carriers delayed a total of 9,102 flights in the first half of 2014, with an average of 5.8 percent of flights not departing on time. Among the five LCCs, only Air Busan had a lower delay ratio than the industry average.

In addition, following the crash of Indonesia AirAsia Flight 8501, the safety of LCCs is also becoming a hot issue.

Fortunately, the government is stepping up. In its seventh investment promotion plan announced Sunday, the government said that it will lower regulations for aircraft maintenance, repair and overhaul (MRO) businesses. According to the Transport Ministry, 62 percent of engine repairs and parts replacements are done overseas.

“Because they lack facilities, some LCCs even conduct repairs outside in the winter, which raises safety concerns,” said an official from the Transport Ministry. “We will support establishing an MRO company for airlines and also creating an MRO industrial complex.”