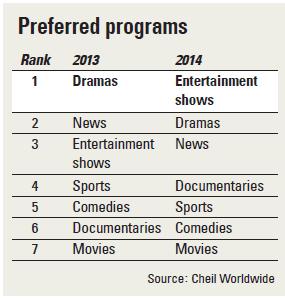 Koreans are becoming savvier media consumers, in most cases using more than one electronic device to access content.

According to Cheil Worldwide, a media and advertising consulting company under Samsung Group, Koreans prefer watching entertainment programs, while consuming media content in their free time instead of in front of the television as it airs.

On Tuesday, the company released the results of a poll conducted last year that surveyed 2,000 people aged between 13 and 59, in eight regions across Korea, including Seoul.

More people watch web cartoons and videos that don’t consume as much time as regular show, it said, comparing that consumption as a snack, rather than a meal, and summarizing the trend as “snack culture.”

Daily and frequent smartphone use is the primary reason behind this phenomenon, Cheil said, which allows people access to any kind of entertainment anywhere, any time.

The survey also showed that more people use their smartphones to log on to social networking services, watch video and listen to music. Traditional functions, such as making phone calls or sending text messages, were weak by comparison.

Snack culture was also seen in respondents’ media preferences, with many choosing one-time variety shows as their favorites. In 2013, consumers selected dramas and news as their top two video contents.

Multi-tasking was also highlighted in 2014, Cheil’s survey showed, with 67.8 percent answering that they use two electronic devices to consume media content. The most popular combination was via television and mobile phone.

When asked why they use multiple devices, the No. 1 answer was to consume various content. Respondents added that they also searched for information seen on their primary devices on a second device ? the No. 2 answer.

This trend was more noticeable in young people. Of those under 20 years old, 25.8 percent answered that they do not watch TV programs during scheduled times, while 22.8 percent

of those in their 20s answered the same.

When they missed their favorite TV program, 44.5 percent said that they use video on-demand (VOD) services, while 41.6 percent said they wait until the rerun is aired.