New Galaxy A line is all metal and only $447

New Galaxy A line is all metal and only $447 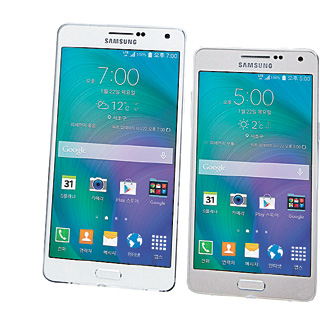 Galaxy A5 Galaxy A7

Samsung Electronics is coming out with more affordable smartphones, unveiling the midrange Galaxy A5 Wednesday that features a full metal body and a slim design.

The cheaper smartphone with a beefed-up selfie function will be retailed through the three mobile carriers - SK Telecom, KT and LG U+ - from today for 484,000 won ($447).

Samsung said last October it planned to launch an affordable Galaxy A series of phones in emerging markets to better compete with Chinese manufacturers Xiaomi, Lenovo and Huawei.

The company’s market share has declined in those markets as cheaper Android phones priced 300,000 won to 400,000 won by Xiaomi and Coolpad stole customers.

“Samsung faces a situation in which it must tap into the midrange phone market as mid- to low-end smartphones increasingly take up a larger proportion of the market,” said Lee Seung-hyuk, an analyst at Korea Investment & Securities.

Samsung rapidly increased its midrange smartphones in the fourth quarter, launching the Galaxy A series in China and Taiwan in December.

Samsung said it is also preparing to launch a third handset in its A series, the Galaxy A7, at the end of this month in Korea. It follows the A3 and A5.

The Galaxy A3 was launched overseas and the company did not say whether it will release it in Korea.

The A series comes with high-end designs that use metal frames and full HD displays, which is a lower-resolution display than the quad HD on its top-end models.

The Galaxy A5 is equipped with a 126.3-millimeter (4.9-inch) HD super Amoled display and a quad-core processor. It is 6.7 millimeters thick.

It has special functions for taking selfies, since people are continuing to use smartphones to share pictures on social networking services.

The Galaxy A5 offered a 5-megapixel front camera with various fun camera functions. Users can activate the camera without having to unlock the screen.

Before taking a picture with the front camera, users can adjust their skin tones, the sizes of their eyes and can change the shape of their faces through a Beauty Effect function.

They can activate the shutter by voice or a hand motion. The camera also offers the so-called Wide Self Shot, in which a crowd can be photographed together in a 120 degree shot.