Ssangyong CEO Lee to step down after six years

Ssangyong CEO Lee to step down after six years 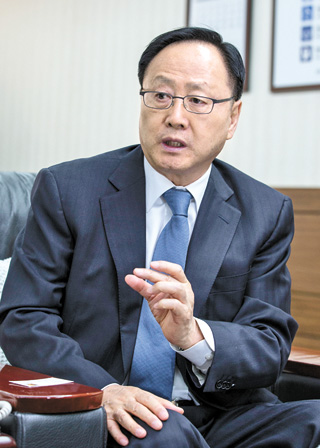 Lee Yoo-il, CEO of Ssangyong Motors, said Wednesday he will resign from the post in March. It is about six years since he was appointed as a co-legal administrator in February 2009.

Ssangyong Motor, the nation’s smallest automaker, went into court receivership in February 2009. Two months later, a management led by the court-appointed Lee laid out a restructuring plan that included layoffs of 2,646 employees, or 37 percent of the work force.

Lee was named CEO in 2011 by the Mahindra Group of India, the mother company of Ssangyong.

There were many hardships for the company during Lee’s stewardship, but he was considered a decent leader who helped the financially struggling company.

The 72-year-old started his career with Hyundai Motor in 1969 and has been working in the auto industry more than 30 years.

“I think I have done everything I need to do,” Lee told reporters during a test drive event for the company’s new Tivoli SUV that was held in Yeouido, western Seoul, Wednesday. “I will step down from the CEO post before the annual general meeting of shareholders is held in March.”

There were rumors in the industry that Lee would continue to lead the company, but he said that he decided to step down in consideration of his age.

“I already discussed leaving the company two and a half years ago with Mahindra Group Chairman Anand Mahindra,” Lee said.

“I met him again when he visited Korea to participate in the Tivoli’s launch event that was held earlier the month and told him that the possibility of my continuing my career at Ssangyong was very low.”

Regarding his successor, Lee said, “I’m not sure who will lead the company, but I’m sure it will be someone from within our management, not someone from Mahindra Group.”

Ssangyong Motors said Lee might continue to work as an adviser to the company.

“The one thing I really wanted to accomplish during my term was to make a profit,” said Lee.

“Unfortunately, we weren’t able to realize that goal due to the new agreement between the company and the labor union [in which the company increased workers’ base pay by 30,000 won and agreed to a regular bonus].”

Due to the increase in labor costs, the company has to spend an average of 85 billion won more every year.

Lee is scheduled to visit the United States to meet local consultants about the company’s plan to enter the U.S. market.