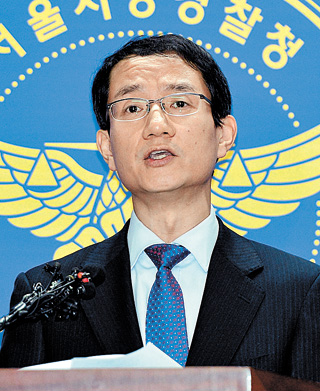 Chief Superintendent Chung Jae-il of the Seoul Metropolitan Police Agency gives a briefing Wednesday on the investigation into the vanishing of an 18-year-old Korean. [NEWSIS]

The Korean teenager who disappeared on the Turkey-Syria border showed interest in a violent jihadist group online for months before he left Korea and publicly announced his intentions to join the Islamic State in Iraq and Syria (ISIS), the police said Wednesday.

The Seoul Metropolitan Police Agency held a media briefing and announced its findings on the vanishing of the 18-year-old Korean, identified by the surname Kim. The police said the teenager’s disappearance in a Turkish town on the border with Syria won’t be treated as a missing person case or abduction because evidence showed he acted on his own.

Kim and a family friend surnamed Hong, 45, entered Turkey on Jan. 8, and then moved to Kilis, a city near the border with Syria. The 18-year-old Seoul resident went missing two days later. His mother reported his disappearance to the Korean police on Jan. 15.

“Based on our investigation, we concluded that Kim had been obsessed with a trip to Turkey,” Chung said. “He arranged the travel to Kilis, managed to lose his traveling companion and left the hotel. No evidence suggests that he was abducted.”

The police also talked about the possibility that Kim may have joined ISIS.

“Various data showed that Kim had shown deep interest in ISIS, but we cannot confirm whether he joined the group or not,” Chung said.

If confirmed, Kim will be the first known Korean to join the radical terrorist group.

The police investigation revealed that Kim expressed interest in the radical Islamic group for the first time in March last year. On the Facebook page “Join Islamic state,” Kim posted his first message in imperfect English that read, “I want join islamic state please can you help?”

Kim also posted a message that read, “I want leaving my country and families just want to get a new life,” on his Facebook page on Jan. 7 shortly before he went to Turkey.

The police also restored deleted data from Kim’s computer and discovered that he had 47 images related to ISIS. They were mostly photos of ISIS members holding guns, although some were also of Muslim women. During the first investigation, photos of ISIS militants posing in front of the group’s flag were discovered on the desktop wallpaper of his computer.

According to the police, Kim aggressively pursued the possibility of joining ISIS starting in October. Writing on his Twitter account on Oct. 4, Kim posted a message that read, “how to join isis Does anyone know? I want join isis.”

Following the posting, Kim received a message from a Twitter user @Afriki, which said, “Someone just tell me tht if u wanna join #ISIS go to turkey first than from there is easy to join.”

More discussions followed on Oct. 9, after Kim declared, “my dear brother. I was ready to join isis where I going to country?” using his Twitter account. Afriki replied, “Try this brother his name is hassan,” adding that the man was in Istanbul.

He gave Kim a phone number.

The Twitter user @Afriki also informed Kim that he should add another person on Surespot, an encrypted instant messaging application for mobile phones, indicating that more discussions could have taken place using that service.

The police said Kim made two phone calls after he arrived in Turkey. The first was made at about 8 a.m. on Jan. 9 and the second at 1:47 p.m. on Jan. 10. Each call lasted for about three minutes. The second call was made after Kim left a hotel in Kilis without his companion.

The police said Kim’s mobile phone is currently on, but when it is dialed a message says, “The number you have called cannot be reached.” That indicates that Kim is either rejecting his incoming calls or is outside a service area.