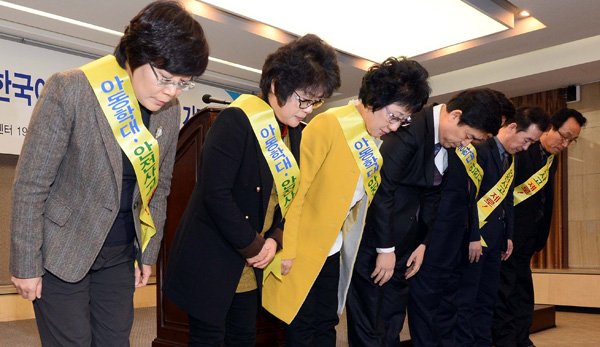 Korea Edu-care Association President Jeong Gwang-jin, fourth from left, bows with other association members at a briefing on Wednesday at the Press Center in central Seoul. Jeong said the association will work to eradicate child abuse by educating child care teachers and certifying day care centers with no record of abuse. [NEWSIS]

A series of recent child abuse cases in Incheon appears to have triggered a string of others, according to authorities, who have been flooded with complaints over the past week concerning day care centers suspected to have mistreated their students.

The latest case involves a 41-year-old day care center owner in Ulsan, who local authorities suspect abused some of her students and filed false claims about the number of teachers at the facility to get additional subsidies from the government.

The Ulsan Metropolitan Police Agency arrested the woman, surnamed Kim, on Tuesday after she was alleged to have filled a 22-month-old boy’s mouth with wet tissues and towels on several occasions since November.

Authorities were tipped off by an employee at the center, who also claimed that Kim had tied up a 2-year-old student with a pair of leggings and left him alone on the restroom floor. She is also alleged to have buckled 10-month-old twins to a rocking chair with a belt and then left them alone.

Kim’s younger sister is also under police investigation. She is suspected to have locked a 24-month-old boy and 27-month-old girl in a classroom with the lights turned off in separate incidents.

Police are currently analyzing the security footage at the day care center taken Monday, the only records available. They added that there was a possibility that Kim may have deleted footage and are planning to send the storage device to the National Forensic Service for restoration.

Further down in Masan, South Gyeongsang, the Masan Jungbu Police Precinct are questioning a 36-year-old teacher at a local day care center.

She is suspected to have locked a 3-year-old boy alone in a classroom and scolded him in the corner of the classroom in July for bullying other students.

The police said that a child protection organization had assessed her behavior as “forcible physical abuse.”

The teacher explained to the police that her actions were “to discipline the boy to keep him from bothering other students,” according to authorities.

However, the case has raised concerns that many parents may be overreacting, going so far as to report trivial matters to officials.

In some CCTV clips, the 36-year-old teacher is seen patting the boy after his reprimand.

“When looking at the context of the security footage, it is difficult to discern whether she abused the boy or scolded him,” said Changwon-based lawyer Ahn Seong-il. “Even if she is considered to have abused the child, it would lead to conflict in court given that constitutional law may justify her actions if they are proven to be related to her job.”

On Wednesday, a 25-year-old teacher who is believed to have physically abused at least 10 students at a day care center in Bupyeong District, Incheon, appeared before police for questioning.

When asked by the media whether she would admit to the allegations, she repeatedly stated, “I’m sorry.”

The teacher, also surnamed Kim, was reported to have admitted to the incidents caught on CCTV footage, though denied other allegations.