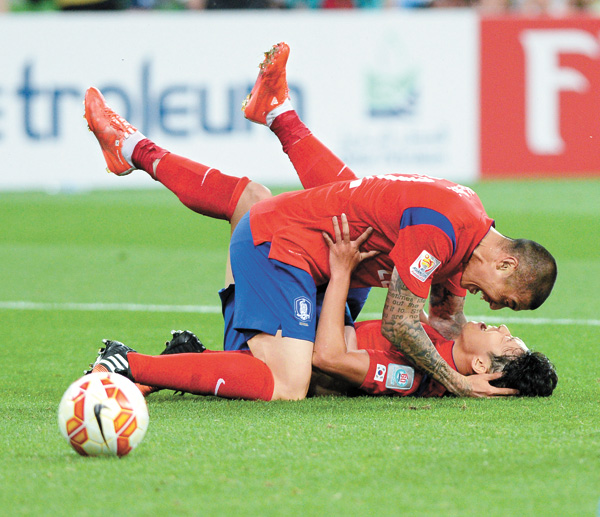 Son Heung-min, bottom, celebrates with Cha Du-ri after he scores Korea’s second goal in their quarterfinals match against Uzbekistan in the Asian Cup on Thursday. [NEWSIS]

“Sonsational” Son Heung-min’s two goals in extra time lifted the Taegeuk Warriors over Uzbekistan to advance to the semifinals of the Asian Football Confederation’s Asian Cup on Thursday in Melbourne, Australia.

The two sides missed several critical chances during 150 minutes of play, but Korea managed to break its streak of 1-0 wins in all three of its group matches.

South Korea came out with a 4-2-3-1 formation. Son, who missed two Group A matches due to a cold, was included in the starting lineup. With attacking midfielder Koo Ja-cheol and right midfielder Lee Chung-yong out with injuries, Manager Uli Stielike sent in Nam Tae-hee and Lee Keun-ho to replace them. Lee Jung-hyup, who scored the only goal in the group match against Australia, started as a striker.

The game remained scoreless throughout the first and second half.

Though 71st-ranked Uzbekistan is considered weaker than 69th-ranked South Korea, the Uzbek players had several ominous chances. The team had possession for most of the opening stage of the game, and midfielder Sanzhar Tursunov had a one-on-one chance on goal in the 17th minute, but goalie Kim Jin-hyeon blocked it. After it bounced away, Odil Ahmedov received a cross and made another shot that missed.

However, South Korea was putting in plenty of its own effort. After the side’s first shot by Lee Keun-ho in the 18th, the Taegeuk Warriors cornered the Central Asian country. In the 26th, Son had a goal attempt from the penalty box to the right-top corner of the net, but goalie Ignatiy Nesterov was able to punch it away. Ki Sung-yueng then fired a midrange effort from just outside the penalty box that missed.

The two teams also exchanged scoring chances in beginning of the second half. In the 50th, striker Lee Jung-hyup headed a free kick from Ki toward the right side of the goal, which was saved. In the next moment, the Taegeuk Warriors narrowly avoided an own goal when Kim Jin-hyeon cleared the ball, but it was deflected back by defender Kim Jin-su and headed past the left of the net.

In the 63rd, Uzbek striker Sardor Rashidov received a spectacular lobbed pass that he tried to tap in, but his effort was thwarted by goalie Kim. Then in the 79th, Rashidov was left unmarked and crossed the ball to his teammate Lutfulla Turaev, who was also unmarked. Turaev tried to head the ball in, but missed the goal by inches. It was the best chance the team would get.

When the game went into extra time, both sides still struggled to score. It was Son who finally broke the tie in the 133th minute. The 22-year-old midfielder’s header was blocked by the Uzbek goalie, but the ball rolled out of his hands and crossed the line into the goal.

Just minutes before the game ended, defender Cha Du-ri, who was subbed in for Kim Chang-soo in the second half, did it again. He made a fantastic breakaway down the right and passed the ball to Son, who kicked it into the goal with force.

In the semifinal, Korea will face the winner of Friday’s quarterfinals match between Iran and Iraq.