Young lose interest in owning their own homes

Young lose interest in owning their own homes 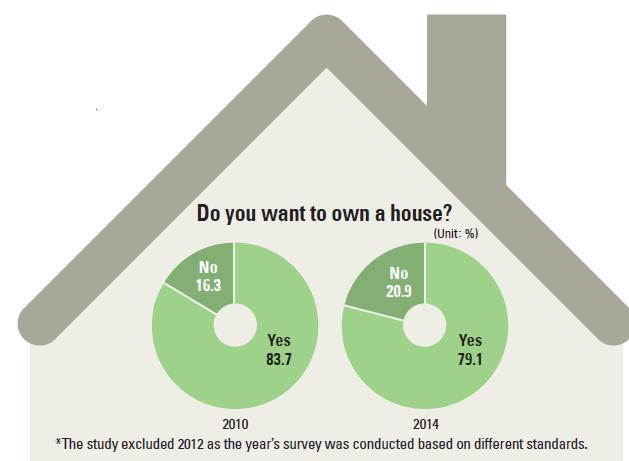 Fewer Koreans aspire to own their own home. For an increasing number of younger Koreans, moving often and paying monthly rent is the way to go.

According to a biennial national housing index released Thursday by the Ministry of Land, Infrastructure and Transport and the Korea Research Institute for Human Settlements, 79.1 percent of 20,000 participants surveyed nationwide said they want to own a house, down 4.6 percentage points from the 83.7 percent who said yes in 2010.

(The study excluded a comparison with 2012 because that year’s study was based on different criteria.)

The drop in home-owning aspirations was especially sharp in young household heads aged 34 and younger.

The rate of actual ownership of houses by the average Korean also dropped slightly by 0.4 percentage points to 58 percent compared to 2012.

The rich population - with annual incomes in the top 20 percent - bought more houses, while middle and low-income families sold their houses to live on two-year jeonse (long-term deposit) contracts or in monthly rentals.

The population living in monthly rentals increased, while that of jeonse dwellers shrank over the past two years.

About 36.6 percent of Koreans surveyed moved in the past two years, and their average time living in one location fell to 7.7 years.

“For most Koreans, housing prices are high regardless of the income level,” said Kim Hye-won, an official at the Housing Policy Department of the Land Ministry.

“The younger the survey participant, the sharper the drop in willingness to buy a house,” Kim explained.

“Many Koreans in their 20s and 30s - the so-called sampo generation - face an unstable employment status and income.”

The sampo (three forsaken) generation refers to people who are giving up on three goals in life due to lean economic times: dating, marriage and childbirth.

Kim added that perceptions about house buying differs depending on ages and where people live.

“Housing is not the most attractive and stable method of investment for retirement according to people living in the greater Seoul area,” Kim added. “Only the older generation values residential stability as a priority for retirement.”