Serena fights to secure spot in 3rd round in Australia

Serena fights to secure spot in 3rd round in Australia 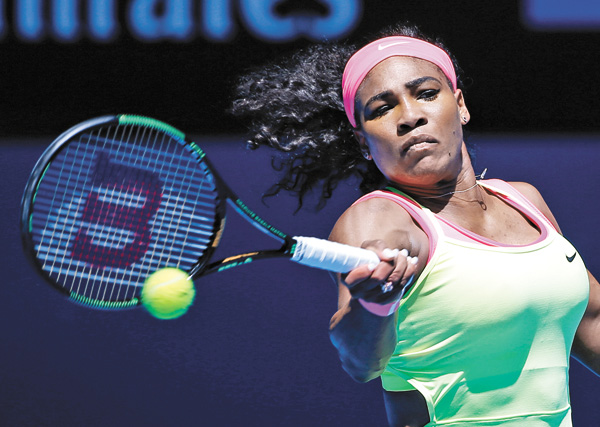 Serena Williams of the United States makes a forehand return during her second-round match against Vera Zvonareva of Russia at the Australian Open tennis championship in Melbourne, Australia, on Thursday. [AP/NEWSIS]

Top-ranked Serena Williams fended off three set points before going on a 10-game roll to beat Vera Zvonareva 7-5, 6-0 and move into the third round of the Australian Open.

Defending champion Stan Wawrinka, who ended four-time champion Djokovic’s 25-match winning streak at Melbourne Park in the quarterfinals last year, advanced to the third round for the seventh consecutive year with a 7-6 (4), 7-6 (4), 6-3 win over No. 194-ranked qualifier Marius Copil.

Williams, seeking a sixth Australian and 19th Grand Slam title, saved three set points in the ninth game before holding to swing the momentum of her match against Zvonareva, a two-time Grand Slam finalist.

That’s when she told herself: ‘“You know Serena, you’ve done so well here, you have nothing to lose.’’’

“Things really clicked. I had no other option but for things to click,’’ she added. “Yeah, I just had to start playing better.’’

Williams said she had to transition quickly to get past such an experienced player in the second round.

“Playing Vera is like, I had to get my mind like, ‘Serena, this girl has been ranked as high as No. 2 in the world ... she’s a very quality player, she knows what to do,’’ Williams said.

After breaking Williams’ serve twice in the first set, Zvonareva only won eight points in the second set.

Williams will next play No. 26 Elina Svitolina.