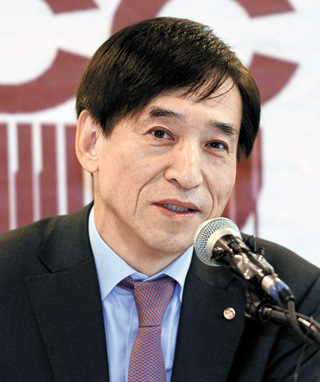 Lee Ju-yeol, governor of the Bank of Korea, hinted Thursday he wasn’t keen on cutting the benchmark interest rate, citing his concern about the highest-ever level of household debt.

“Two previous rate cuts have helped ease the financial crunch and there needs to be more time to see the effect of the cuts,” Lee said at a press conference with foreign media in Seoul. “Since last October, the country’s household debt growth accelerated. There is a need to be cautious of increasing risks in terms of financial stabilization.”

The governor hinted that the central bank has no intentions of seeking another rate cut following the two earlier cuts that lowered the key interest rate to its historic low of 2 percent.

After President Park Geun-hye mentioned during a New Year’s speech on Jan. 12 that the central government will coordinate its monetary policy with the central bank, some analysts expected the central bank to cut another 0.25 percentage point to reach a record low of 0.75 percent around the second quarter.

Regarding the recent adjustment of the BOK’s growth forecast for this year, Lee stressed that the central bank’s downward revision in its economic outlook did not reflect pessimism about the Korean economy.

“The central bank lowered its growth forecast due to exceptional factors in the fourth quarter, but this doesn’t mean the BOK has a pessimistic view of this year,” Lee said. “A mid-3 percent growth is reasonable in my opinion considering the country’s potential growth rate.”

The BOK slashed its growth outlook for 2015 to 3.4 percent from 3.9 percent last week, citing gloomy consumer sentiment on top of rising household debt and a weakened export performance in the fourth quarter.

Consumer spending was exceptionally weak, the governor pointed out. The problem is that there are no specific factors that would contribute to increasing incomes while household debts are high.

This year’s growth estimate was lowered from the 3.9 percent projected last October. It is far lower than the Finance Ministry’s revised outlook, which is 3.8 percent. “Global financial markets are now highly sensitive to risks,” the governor said. “The BOK is also enhancing monitoring changes in global markets.”

The central bank is paying keen attention to the European Central Bank’s bond-buying program that is expected to be announced on Thursday, Lee added. Low oil prices can be a double-edge sword for the Korean economy, Lee commented.

“Not all industries can benefit from lower oil prices,” he said. “Petrochemical and refining companies are facing difficulties, while businesses operating in the Middle East are experiencing hardships, too.”

But Lee didn’t agree with concerns about the possibility of lower oil prices triggering deflation in the Korean economy.

“We do not believe that deflation will come anytime soon,” he said.

The country’s top monetary policymaker also said the central bank will cooperate with the government in carrying out structural reforms.

“Structural reforms will be beneficial for the overall economy,” he said. “There might be some slowdown in economic growth during the process of carrying out reforms in the labor market, but that impact will not be huge or long lasting.”