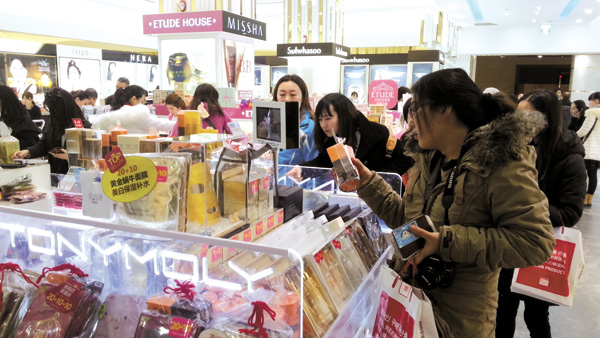 It was 5:30 a.m. on a recent Saturday and Lee Ji-hyun, a manager at a Lotte Duty Free Shop on Jeju Island, was already busy preparing to welcome a group of Chinese tourists on a cruise to Korea.

A total of 2,325 Chinese aboard a cruise ship were scheduled to arrive at Jeju Port from Shanghai at around 7 a.m.

The 30-year-old manager hung a welcome banner written in Chinese characters and arranged a celebratory performance before their arrival.

Catering to Chinese tourists - even before breakfast - is a big deal for duty-free shops on Jeju Island as a record number of them are visiting the scenic resort island via cruise ships. Last year, 590,000 Chinese tourists went on a cruise to Jeju. About 90 percent of sales at Jeju’s Lotte Duty Free Shop are credited to the Chinese. 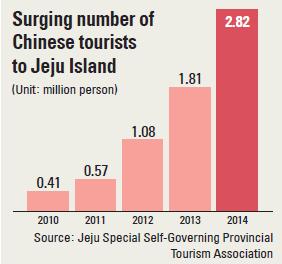 Duty-free retailers are particularly keen on targeting cruise ships since they disgorge such big amounts of bored tourists with deep pockets.

So the two licensed duty-free shops, Lotte and Shilla, engage in fierce competition.

But Lotte is lagging behind because its shop in Seogwipo is far from the Jeju Port.

Tourists who come on cruise ships have to travel 90 minutes by car or bus to get to the store, while the Shilla shop is only 15 minutes away. Sales at the Shilla store are double Lotte’s, according to industry sources.

Given that a cruise ship typically berths in Jeju for up to six hours, tourists don’t have a lot of time to sightsee and shop. Also, the law stipulates that tourists should finish duty-free shopping two hours before a cruise ship departs, further reducing shopping time.

There is another factor that has Lotte on edge. Lotte’s license to operate a duty-free service will expire in March and a new bidding process will soon begin.

Lotte is pulling out all the stops to renew the license. But it is facing competition from Shilla, which wants to control both licenses, and the Booyoung Group, which will open the Booyoung Hotel in March.

Lee Hong-kyun, CEO of Lotte Duty Free, promised to contribute to the local economy if the company is selected once again to run the service.

He promised to let property taxes go to the coffers of the Jeju Special Self-Governing Province. Those taxes currently go to the Seoul City Government because Lotte is based in Seoul. It also came up with a plan to establish a separate section in the duty-free shop dedicated to specialty foods from the island to give business to local farmers. On top of that, Lotte also said it will hire a total of 2,600 Jeju residents by 2019.

The central government’s plan to license more duty-free shops will further intensify competition among retailers. The Park Geun-hye administration said on Jan. 18 that it will issue licenses for more duty-free shops to cash in on the growing number of foreign tourists.

The Korea Customs Service said it will issue three additional duty-free shop licenses for Seoul and one for Jeju.

Builder Hyundai Development Company as well as major retailers besides Lotte and Shilla will vie for the Seoul licenses.

Bidding has not started for the new Jeju license.