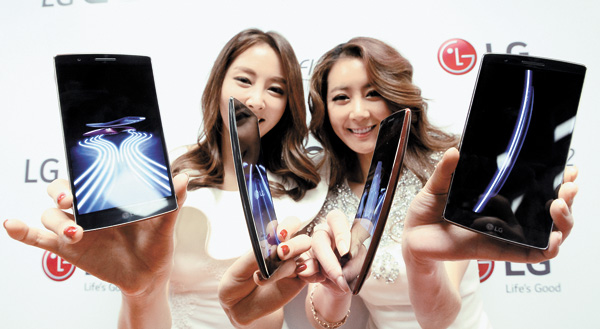 LG Electronics on Thursday unveiled its much-anticipated G Flex 2, the second model in its curved smartphone G Flex series, after it showed the phone for the first time at the Consumer Electronics Show in Las Vegas earlier this month, when it received rave reviews from critics and visitors.

LG Electronics showed the curved smartphone at an event at its headquarters at LG Twin Tower in Yeouido, western Seoul.

It is curved to fit the contours of the user’s face and has a 5.5-inch full-HD plastic OLED display.

LG even appointed famous fashion designer Choi Bum-seok as its creative director last year to work on the phone series.

The improved G Flex 2 is equipped with Qualcomm’s Snapdragon 810 processor that supports the 3-band LTE-A network.

But there have been widespread rumors since the end of last year that Snapdragon 810 causes phones to overheat, which LG said was groundless. The company said the G Flex 2 does not overheat.

“G Flex 2 has an optimal cooling system so consumers won’t have to worry about the issue,” said Choi Yong-soo, head of mobile communications business research institute at LG Electronics.

LG has also upgraded innovative functions of the smartphone from the previous version.

The self-healing function of the G Flex, in which the film on the back of the phone automatically fixes scratches, has also been improved.

The film can fix a scratch 18 times faster compared to the G Flex.

It also has a quick charge function, filling the battery to 50 percent within 40 minutes, which would normally take about 55 minutes.

LG has also made the phone easier to use. The Glance View feature allows the user to scroll through the time, weather, new messages and missed calls even if the screen is locked.

“We have upgraded the smartphone, especially in its design, by completing the three-dimensional curve. We plan to start selling it overseas next month,” said Kim Kyung-hwan, a spokesman for LG Electronics.

Market research firm Counter Point and The Wall Street Journal said that while LG’s smartphones are doing well globally, Apple has surpassed LG as the No. 2 smartphone maker in Korea after Samsung, securing a 33 percent market share as of last November.

LG trailed behind with a 14 percent market share in November, while Samsung’s market share fell to 46 percent that month from 60 percent in October, according to the reports.

But Apple, which had a market share of less than 15 percent in Korea in October, had doubled its share to 33 percent by November.

“It is the first time that a foreign smartphone manufacturer has secured more than 20 percent of the market share in the Korean smartphone market,” said a spokesman for Counter Point. “The iPhone 6 and iPhone 6 Plus have succeeded in bringing the change.”

The research firm even suggested that if the supply of the iPhone 6 was normalized, Apple could have overtaken Samsung to become the No. 1 smartphone brand in terms of market share in Korea.

There has been a lack of supply of iPhone 6s in Korea, especially the 128 GB model. Many consumers had to reserve phones and wait for an indefinite period of time until retailers get more phones.

Global iPhone sales in the fourth quarter were expected to exceed 70 million units, according to The Wall Street Journal.

LG said at the conference Thursday that it will continue to develop its other midrange smartphones, including the AKA phone and G3 Beat due to growth in the mid- to low-end smartphone market in Korea.

“We plan to compete using strategies to satisfy consumers’ needs and preferences, rather than just by lowering the cost of production,” said Cho Sung-ha, vice president at LG Electronics.