Hyundai’s profit at lowest in 4 years

Hyundai’s profit at lowest in 4 years 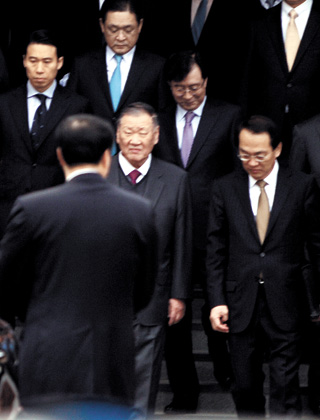 Hyundai Motor Group Chairman Chung Mong-koo, center, inspects the Gwangju Creative Economy Innovation Center on Thursday ahead of its opening next week. It was his second visit to the center. [NEWSIS]

Hyundai Motor on Thursday reported its lowest annual operating profit in the past four years at 7.55 trillion won ($6.95 billion).

In a conference call held Thursday at its headquarters in Yangjae-dong, southern Seoul, the nation’s leading automaker announced its 2014 performance, stating that its operating profit had dropped by 9.2 percent from 8.31 trillion won in 2013 despite a 4.8 percent increase in global sales over that time.

Hyundai Motor said that the drop in profit was mainly due to the falling won-dollar exchange rate and the declining value of currency in other newly industrialized countries.

“Revenue and car sales increased over the year with some new models such as the Genesis and Sonata [sedans],” the company said in a statement. “But profitability dropped due to some barriers in the market, including the strong won and unstable foreign exchange rates.”

The average won-dollar exchange rate dropped by 3.8 percent from a year ago, according to the company.

The company said another positive point last year was the improvement in its performance from the third quarter to the fourth quarter. In the third quarter, the company posted its lowest quarterly operating profit in four years, with 1.65 trillion won, an 18 percent year-on-year drop.

“We actually did a better job in the global market, with some models that targeted a particular nation including the i20 [hatchback for the European market],” the statement said. “But profitability fell because of the falling currency value in newly industrialized nations, including Russia, in that quarter.”

After wrapping up 2014, Hyundai Motor announced its plans for this year, saying its goal is to sell 5.05 million cars - 690,000 in Korea and 4.36 million in foreign markets. If it reaches the target, it will be a 1.8 percent rise in sales over last year.

“Our goal is to improve the overall product quality and to lower production costs by improving productivity,” said Lee Won-hee, president of Hyundai Motor’s finance and accounting division. “As we announced last year, we will invest about 81 trillion won in the next four years to improve our capabilities in research and development and will try to expand our market share in the environmentally-friendly vehicle market.”

After posting last year’s performance, the company announced surprising news, saying that it will give interim dividends to its shareholders for the first time since it went public in 1974.

The company said it will raise the current 1,950 won dividend per share to 3,000 won, which industry insiders see as a way to boost the value of the company’s shares. Its shares have been consistently falling since the company decided to spend 10.5 trillion won on a plot of land in Samseong-dong, where it will build a new 105-story headquarters.

“The dividend per share will be increased by 54 percent from a year ago,” said Lee. “It will be 3,000 won per ordinary share and 3,100 won for per preferred stock. We decided to raise the dividends in order to bring them up to the global average and will continue to increase them in the future. We will bring this item to a general meeting of shareholders scheduled for March to get approval.”

The company’s current share value is relatively lower than automakers in the United States and Europe. Hyundai Motor and Kia Motors’ global combined market share is 9.5 percent in terms of sales, but the company accounts for only 5.1 percent (60 trillion won) of the total market capitalization of the world’s top 30 automakers. This means that the value of Hyundai Motor’s shares is relatively lower than many foreign companies.

Since the company won the bid for the Kepco land, the average share price has dropped from 235,000 won to about 160,000 won this month, and the company has been trying hard to raise the value. In December, for instance, the company spent 460 billion won to buy 1 percent of its own shares.

“The overall evaluation on the company will be improved by investors if we raise the dividends,” said a Hyundai Motor spokesman. “We are also trying to catch up with the government’s policy of asking conglomerates to increase dividends as part of their plans to improve the domestic economy.”
sakwon80@joongang.co.kr [BY KWON SANG-SOO]