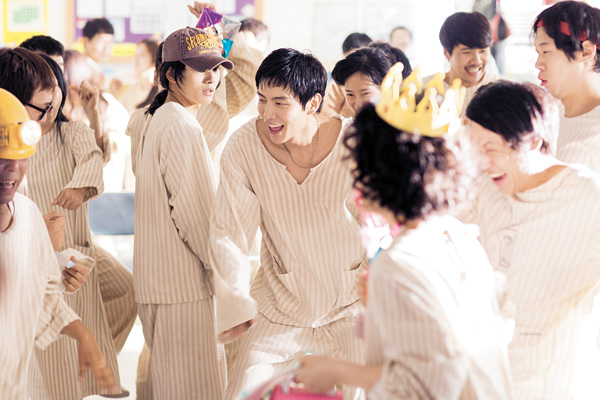 Lee Min-ki, center, plays rebellious patient Seung-min, who attempts to break out of desolate psychiatric institution Soori Hope Hospital to achieve what he wants. Provided by the distributor

If a certain theme swept the entertainment scene last year, it was “healing,” both on the small and big screen. Films and dramas attempted to appeal to viewers by leaving them with messages of hope and the courage to improve their lives, overcome obstacles and achieve their dreams. 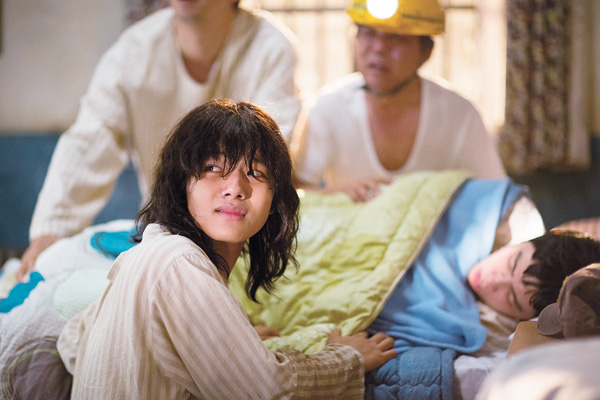 On the other hand, Yeo Jin-gu, left, plays introverted patient Soo-myung who compromises with grim reality to avoid trouble. Provided by the distributor

And now, first-time director Mun Che-yong is jumping on the bandwagon with his debut commercial film “Shoot Me In The Heart,” which is based on award-winning novelist Jung Yu-jeong’s 2009 book of the same title.

Instead of targeting a certain demographic, however, the movie aims to appeal to a wide audience who constantly compromise instead of standing up for what they believe in. 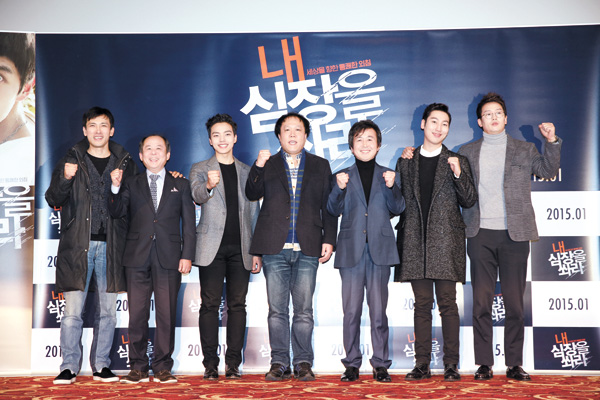 The crew of “Shoot Me In The Heart” pose for a photo at a press event on Tuesday at Lotte Cinema in southwestern Seoul. From left, actors Yoo Oh-seong, Kim Ki-chun and Yeo Jin-gu, director Mun Che-yong and actors Park Choong-seon, Park Doo-sik and Kim Jung-tae. Provided by the distributor

In the film, Seung-min (Lee Min-ki) and Soo-myung (Yeo Jin-gu) become roommates on admission to Soori Hope Hospital, a desolate psychiatric institution located on a mountainside. The derelict venue, which overflows with coercion and violence, is a living hell for the patients. If a hint of happiness and hope is spotted, it is stamped out by the evil nurses.

Soo-myung, who has a phobia of scissors due to an unfortunate incident in the past, manages to live through the grim situation by obeying what the authorities say - unlike his rebellious roommate Seung-min. The good-natured boy keeps helping other patients out, even if it means being tortured afterwards.

But when it comes to dealing with his own issues, Soo-myung is a coward and clams up.

“What is the real you, I wonder?” Seung-min asks Soo-myung one day. “Not the one who escapes or endures, but the one that confronts your life.”

For Soo-myung, the question is a catalyst for change.

Likewise, the line seems as if it is a shot aimed at the hearts of viewers - which is what Mun hoped to achieve in this film.

“I hope this movie will give energy to those who have been hurt and are hiding somewhere,” said the director during a press conference on Tuesday at Lotte Cinema in Gwangjin District, southwestern Seoul.

“I know that feeling because I have failed a lot and it felt as if I was alive, but dead at the same time,” he said, explaining the affinity he felt with the original book. “When I read it, I felt like I was reborn and thought I had to make a movie out of it.”

In the process of adapting a novel into a movie, some details were changed. Explanations about characters were omitted and much additional research was needed to reproduce a fictional mental hospital onscreen. Finding insider information about closed wards was also challenging.

However, there was one thing the director kept in mind during the complicated process of adaptation.

“Jung [the writer] made me promise one thing and that was not to change the core message of the film, which shouts: ‘Be warriors, youths!’”

The movie starts on a dark, rainy day, showing a soaked and dirty ground, and finishes in a brighter mood having some of its characters fly high in the clear blue sky. This was part of the director’s intention in delivering his message.

“We live in a grim, challenging reality, but inside of everyone’s minds there should be a fine dream. I hope that nobody will let go of this dream,” he said.

A round of applause burst out from reporters after the director’s comment. The film opens on Jan. 28.