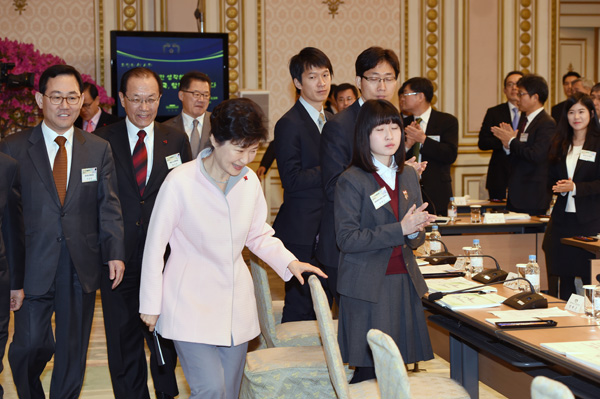 President Park Geun-hye prepares to take her seat in the Blue House conference room on Thursday to hear annual plan reports from six ministries, including the Ministries of Education; Culture, Sports and Tourism; and Employment and Labor. [Joint Press Corps]

The Ministry of Education said Thursday it would persuade local universities to place more emphasis on an applicant’s character in future admissions procedures, in the hope that the criteria will help foster good-hearted people.

The move comes after police released a CCTV video footage earlier this month that showed a 33-year-old day care center teacher at an Incheon facility smacking a 4-year-old to the ground. The video went viral and caused nationwide outrage.

The case has since triggered a flood of similar complaints around the country that other establishments have mistreated their students. It has also raised questions over why such misconduct has been overlooked or gone undetected.

Thursday’s announcement by Hwang Woo-yea, the deputy prime minister and minister for education, came in response to President Park Geun-hye’s earlier order for government agencies to map out measures to eradicate and prevent child abuse.

“[The Ministry of Education] will encourage universities to raise the significance of character assessments in their admissions procedures,” Hwang said, adding that such efforts will primarily affect educational universities and departments.

In the policy report meeting organized at the Blue House, Hwang was accompanied by officials from the Ministries of Environment; Employment and Labor; Health and Welfare; Gender Equality and Family; and Culture, Sports and Tourism.

An Education Ministry official, speaking on the condition of anonymity, provided further details, saying that more research was required on how the ministry was specifically going to apply character assessment criteria in college admissions, though it could likely be accomplished through character-assessment interviews.

Universities that effectively cooperate with the ministry’s initiative will receive financial aid, the ministry official added.

The education authority said policy research on how education universities and education departments can implement more effective character evaluations will begin in April.

In July, before Korean universities begin recruiting freshmen via early admissions, the ministry will seek out schools planning to implement the best character-assessment measures for the next year and share expertise with other schools.

“In the educational circle, we all agree with the idea that character is much more important than intelligence in students who wish to become teachers,” said Lee Jai-hee, the president of Gyeongin National University of Education in Incheon, Gyeonggi.

“Not only do [educational universities] try to emphasize character in the admissions processes, but they go further to highlight [those virtues] in school courses.”

All 10 educational universities in Korea reportedly organized character and aptitude interviews in their admissions processes this year.

Chang Yong-kyu, in charge of educational affairs at Seoul National University of Education in Seocho District, southern Seoul, said those schools will likely follow the government’s efforts to underscore morality in society.