Economic growth is weakest in more than two years

Economic growth is weakest in more than two years

Due to sluggish exports and weak domestic demand, the Korean economy grew at the slowest pace in more than two years, consolidating a low growth trend despite the government’s aggressive efforts to boost the economy.

According to the Bank of Korea Friday, the country’s gross domestic product rose 0.4 percent in the fourth quarter of last year. That made annual growth of 3.3 percent for 2014.

The fourth-quarter figure matched the median estimate in a Bloomberg News survey and was the weakest gain since the third quarter of 2012. The economy expanded 2.7 percent from a year earlier, compared with expectations of a 2.8 percent gain. 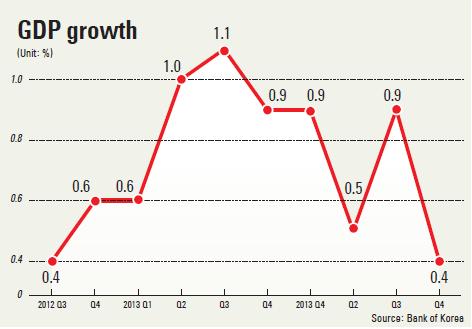 Weak exports dragged down manufacturing last quarter, Jung Yung-taek, a director general at the central bank, said in a press briefing after the data release.

Exports and manufacturing both shrank 0.3 percent from the previous three months.

But the biggest challenge was negative consumer sentiment, which the government has been trying to turn around since the second half of last year with various policy changes including deregulations and two interest rate cuts - one in August and another in October.

Growth in the October to December period was also affected by “irregular factors” such as couples delaying marriages to follow a tradition of not getting married during a lunar leap month, Jung said.

The disappointing performance in the fourth quarter was also due to smaller investments by the government on infrastructure resulting from a tax shortfall and less spending by consumers on new mobile devices after the mobile phone distribution act limited retailers and mobile carriers from offering big subsidies.

“As private consumption growth keeps slowing down, while exports are struggling due to a slowdown in the Chinese economy, it is difficult to find factors that can bolster growth,” said Joo Won, a researcher at Hyundai Research Institute.

The central bank estimates quarterly growth will accelerate to about 1 percent in 2015 after exceptional factors such as the new regulation on mobile-phone subsidies sapped handset sales and the government reduced spending.

The Park government plans a record 375.4 trillion won budget for this year and reforms in the labor market and the financial industry could support growth.

“Growth may rebound from this quarter due to a base effect, but it remains in doubt whether the quality of growth will be strong,” said Kong Dong-rak, a Seoul-based fixed-income analyst for Hanwha Investment & Securities.

Consumer prices in Asia’s fourth-biggest economy increased 0.8 percent in December from a year earlier, the slowest pace since 1999.

Overseas shipments increased 3.7 percent last month from the previous year, compared with a 2.1 percent contraction in November and a 1.9 percent gain in October.

The BOK lowered its GDP growth forecast for this year to 3.4 percent from 3.9 percent on Jan. 15, while cutting its inflation projections to 1.9 percent from 2.4 percent.

Vice Finance Minister Joo Hyung-hwan said in an interview the next day that the government stood by its 3.8 percent growth forecast for 2015. It’s a differing view from the central bank’s reflected a divergence of opinion on the likely impact of government policies, Joo said.

BOK Governor Lee Ju-yeol said Thursday that South Korea’s economic recovery will be better this year than in 2014, adding that the central bank is not pessimistic about growth.

On Jan. 15, he said he expected average quarterly growth of about 1 percent this year, even after cutting the annual growth forecast.