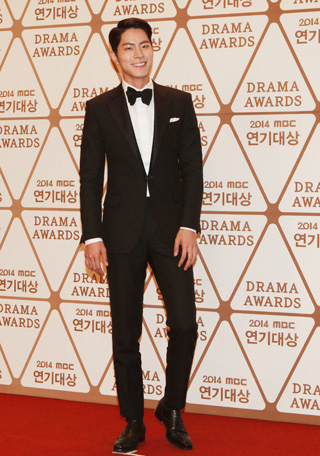 Despite a recent romantic scandal for actor Hong Jong-hyun, Hong and his fictional love counterpart Yura, a member of girl group Girl’s Day, will keep appearing in the reality TV show “We Got Married,” in which celebrities pair up and experience imaginary marital life.

Sun Hye-yun, a producer of the TV show, did an interview with a local Internet news agency Mydaily on Friday and said, “Hong said he is not in a relationship. We have no plans to postpone a scheduled shoot next week for Hong and Yura.”

On Thursday night, some local news agencies reported that the 25-year-old actor is dating Nana, a member of girl group After School.

The news outlets added that the two have been dating each other for seven months and they could develop their relationship further. The two both began their careers as fashion models.

But both Hong and Nana have denied the romantic rumors by saying they are just friends.

Celebrities who star in reality shows like “We Got Married” sign contracts to confirm they are single and will not be seeing someone during the production of the show.

But one of the show’s previous stars, actress Oh Yeon-seo, walked off the show in 2013 after photos of her with actor Lee Jang-woo were published by a local news agency.

The actress was appearing in the reality TV show paired up with Lee Joon, a member of K-pop boy group Mblaq.

The Saturday prime time reality TV show is considered a rite of passage for gaining stardom for newbie actors, actresses and singers.
By Sung So-young