An active weekend begins on the new A-Train

An active weekend begins on the new A-Train

The Jeongseon Arirang Train, also known as the A-Train, started operations this week from Seoul to Jeongseon. It is one of five tourist trains Korail has launched in an attempt to boost train travel. Provided by the Korea Railroad Corporation

Thanks to the establishment of a new tourist train to Jeongseon, Gangwon, it’s now become easier for visitors to experience the birthplace of “Arirang,” one of Korea’s most popular folk songs that is often considered its unofficial anthem.

The train is one of five tourist trains the corporation has launched since 2013 to whisk away train enthusiasts to the farthest reaches of the country.

Because the high-speed KTX is generally the preferred mode of transportation among the business class, Korail decided to promote its other rails toward those who consider time spent on the journey as part of the adventure.

Korail’s previously established trains run through the south coastal areas (S-Train), the demilitarized zone (DMZ Train), the inland areas of North Chungcheong (O-Train) and the mountain valleys in Gangwon (V-Train). The new line to Jeongseon is significant in that it is the first train to be named after a town in the country. 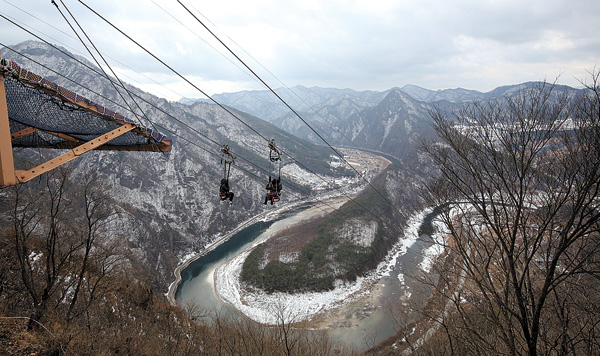 Visitors enjoy a view of Jeongseon on the zip line.Provided by the Korea Railroad Corporation

“We cannot predict how financially beneficial the rail will be for the town, or how many more visitors it will get, but it is still very honorable since this will help us upgrade the brand value of Jeongseon and [put us on the map],” said Baek Ho-min, an official at Jeongseon’s regional government office.

In addition to transport, Korail also offers a variety of travel packages that include a visit to the town’s renowned Jeongseon Five-Day Market, as well as a number of outdoor activities - cycling and zip-lining, for instance.

The local community has embraced the new line as it readies to accommodate more travelers in preparation for the 2018 Pyeongchang Winter Olympics. It takes about 50 minutes by car to travel between Jeongseon and Pyeongchang. 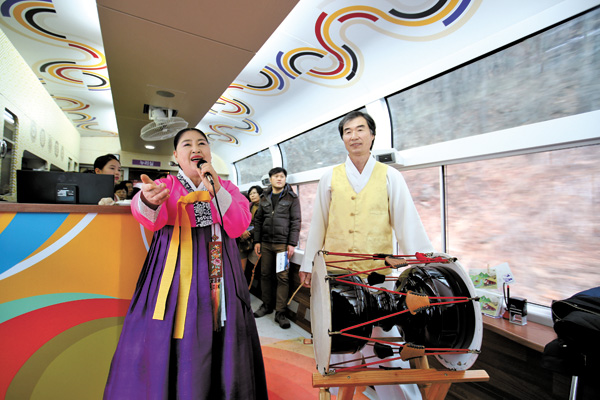 The two are located about 33 kilometers, or 20 miles, apart.

“We hope this train provides visitors the chance to learn more about the cultural opportunities that Jeongseon has to offer,” Lee Eung-dae, the general manager of Korail’s tourism business division, said recently during a media trip to Jeongseon.

“We plan on promoting the tourist train so that the town and its culture become better known in the international community and more foreign visitors can come and learn about ‘Arirang.’”

There’s no need to wonder where to go to learn the famous folk song, which was registered in 2012 on Unesco’s Intangible Cultural Heritage List. From the moment you step onto the A-Train, you’ll continue to hear the same tune over and over until you can’t forget it. 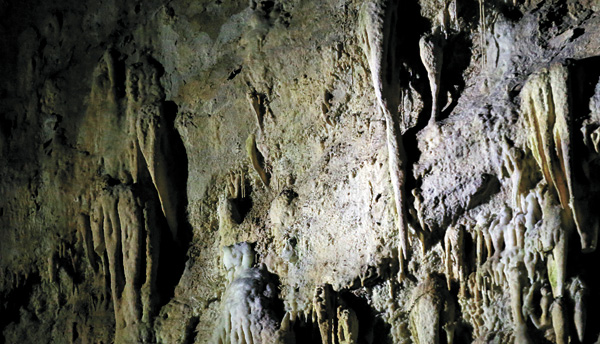 Stalactites are clustered on the walls of Hwaam Cave. Provided by the Korea Railroad Corporation

When tourists arrive at Seonpyeong Station in Jeongseon, they will be greeted by a group of male and female singers, who will perform the song accompanied by a janggu, a type of traditional Korean drum.

The performance is held in the passenger car between the snack bar and the seats. Passengers can sing along, and even take the microphone to present their own renditions.

Though the tune might be simple, local residents have come up with more than 8,000 lyrics to provide variation. You can also improvise and write your own lyrics to create your own “Arirang.”

At Jeongseon Arirang Music Theater, traditional dancers put on a musical that includes “Arirang.” The local district office develops different performances each year to present them to residents and visitors alike. “Menari,” which is currently running, depicts a love story between a boy and a girl who once lived in the town.

To make it easy for travelers to plan a day or two in town, Korail has prepared some travel packages in advance. One of the most famous attractions is the Jeongseon Five-Day Market, set up by local merchants every five days. The market opens on dates that end with 2 and 7, which means vendors come out to sell local food products six days per month. 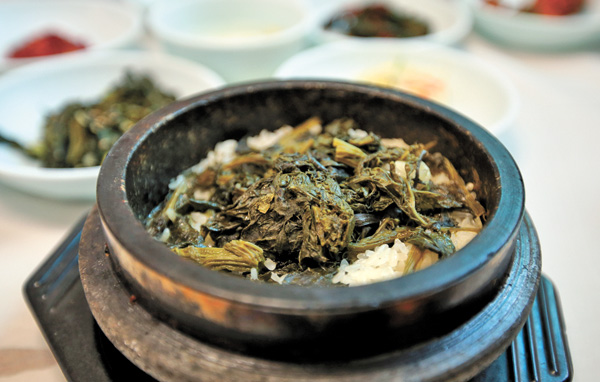 Make sure to try rice mixed with gondeure, a vegetable indigenous to the area. By Park Jun-kyu

The most popular item is a vegetable called the gondeure. The plant is indigenous to Jeongseon County and is practically without flavor.

It was widely consumed, however, during rice shortages and times of famine in town.

Now, it’s a must-try dish for visitors. Locals usually place it atop their steamed rice and mix it with soy sauce or deonjang, fermented beans.

From there, move on to Hwaam Cave, formerly one of the major coal mines in the area. Now restored as a museum, the cave is demonstrative of the poor working conditions miners had to endure to provide fuel for the country. Magnifying glasses are set up inside, allowing tourists to see the gold dust etched in the walls. The cave museum ends in an area filled with stalactites.

For travelers who want a more thrilling experience, the town has a skywalk with a glass floor that runs over a cliff 583 meters high. To ensure a clear view, security guards advise visitors to wear a pair of socks over their shoes. The socks are provided.

But if that’s not thrilling enough, there’s also a zip line if you dare to rely on a single wire to carry you down to the ground. Once you’re hooked in, let go of your fear and appreciate the view.

Still not enough? Rail bikes are also available. The ride takes about 30 minutes to complete, but it can be a bit chilling in the windy winter season. The rail runs alongside endless cliffs.


Info
The train runs every day except Tuesdays and Wednesdays. However, if a Tuesday or a Wednesday falls on a day when the Jeongseon Five-Day Market is open - or on a national holiday - train operation continues.

The train schedule for the month is announced a month in advance on Korail’s website.

A one-way ticket from Cheongnyangni Station to Auraji Station costs 27,000 won. A one-day pass is 48,000 won for unlimited daily rides on the A-Train.

For more information about the line and travel packages, call 1544-7788 or visit: www.letskorail.com.