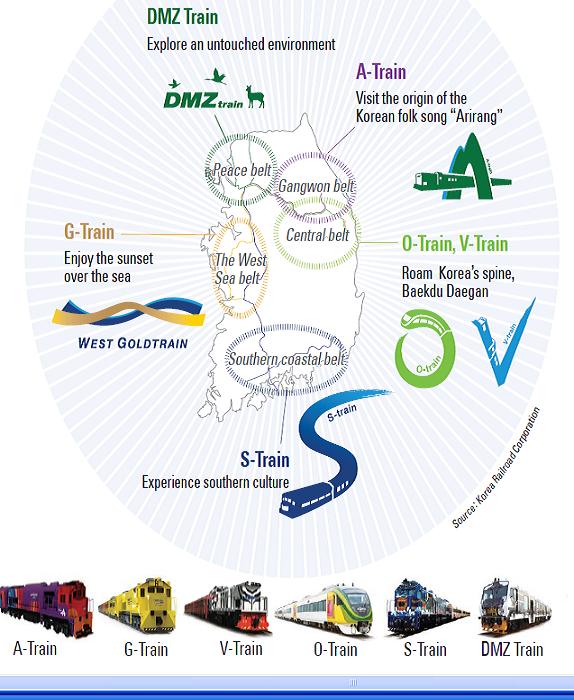 Pushed by the popularity of its special tourist trains, the Korea Railroad Corporation (Korail) is set to launch the West Gold Train next month.

The train, also known as the G-Train, runs down the coastal area along the West Sea, stopping at major travel destinations, including Boryeong, famous for its mud fields, and Gunsan, whose port takes travelers to Seongyudo Island, known for its lovely landscape.

To better cater to travelers who prefer maximum comfort, Korail has decided to offer floor-style seating options on the new train. Instead of individual seats, tourists can book an entire room that includes ondol, a traditional floor-heating system.

One room can seat up to six people. The G-train will have one passenger car solely dedicated to this type of room - nine in total. There is an additional 40,000 won ($37) charge to book a room on top of the cost for a standard seat. Passengers can receive a 50 percent discount until March to book those rooms.

The Korea Railroad Corporation is set to introduce its newest tourist train, the G-Train, next month. Instead of reserving individual seats, passengers can book an entire room that features ondol (left), a traditional Korean floor-heating system. Because the G-Train runs down the coastline along the West Sea, Korail has painted spaces between each passenger car to resemble a beach. Provided by the company

But if that isn’t relaxing, head over to the “healing car,” which has hot foot baths. The foot baths that use hot steam are cheaper - 4,000 won for 30 minutes. The ones with hot water cost 5,000 won for 20 minutes.

Korail has been adding more features to its tourist trains based on reviews it has received in operating its five other trains. The company has decided to differentiate the features on each of its trains to coincide with the characteristics of the city the train passes through.

Once the G-Train starts operation next month, Korail will have six trains, with routes to Gangwon, North Chungcheong, the southern coastline region and the demilitarized zone (DMZ).

“There are many rails that were left out due to the introduction of the higher-speed KTX,” said Hong Jong-hwan, a communications team official at Korail.

“While we try to make better use of the slower rails, travelers also benefit from slow travel, having the time to see the countryside’s charm.”

Different from regular trains, tourist trains provide different entertainment. Trains stay at a station longer so travelers can take some time to appreciate the towns. The V-Train that goes through the mountain valleys of Gangwon stops at Chujeon Station, located at an altitude of 855 meters (about 2,800 feet), the highest among all train stations in Korea. It stops there for about 15 minutes. Travelers can leave the train to take photos or get a quick snack.

“Locals have anticipated the launch of these trains and bring out local food to sell near the station,” Hong said. “Before, these towns rarely had visitors, so the residents are excited.”

Info
The G-Train makes one round trip from Yongsan Station in Seoul to Iksan each day. It only operates Thursday through Sunday until March.