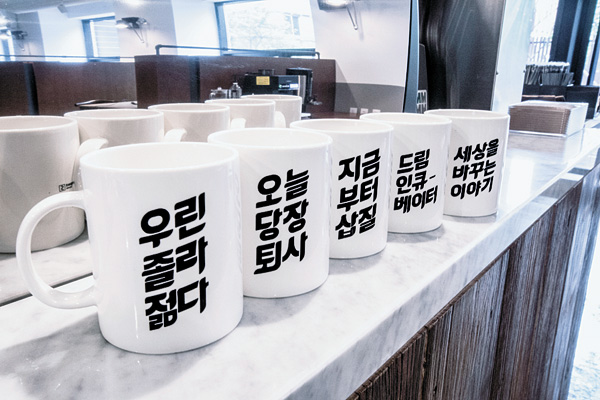 Mugs at the start-up cafe in the Maru180 building.Provided by Mike Impact

The cafe CoW & DoG in Seongsoo-dong, central Seoul, was crowded with about 20 people separated into groups of three to four and hard at work Wednesday afternoon.

Some people were exchanging opinions while walking around the cafe with a mug in their hand, and others were lost in thought in front of their laptops.

“I used to move around among franchise cafes. But, after I came to this place where there are other people like me hoping to establish a start-up, my work started to pick up,” said Seok Joon-ki, 28, who wants to start his own tech company.

Another entrepreneur, Park Hyung-soo, 27, said that start-up support centers at universities feel disconnected because they are usually in a basement and are designed with big partitions between teams. But he said the CoW & DoG cafe, which stands for Co-Working & Do Good, is great because he can communicate freely with people working on other projects.

The co-working cafe is quite different from regular coffee shops that play loud lounge music and have employees shouting out customers’ names.

Customers who sign up for a free membership through an app get a 50 percent discount on drinks and get free Wi-Fi.

The purpose is to serve people looking to establish a start-up with limited funding. CoW & DoG was established by Sopoong, a group that fosters innovative social start-ups. 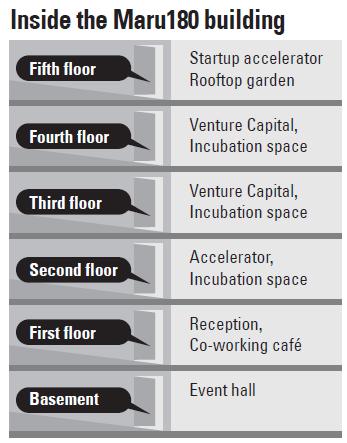 “Through the name CoW & DoG, I also wanted to imply that it is a place where anyone can come to work,” said Kim Ja-young, CEO of CoW & DoG.

“In order for people to be able to talk more freely with others seated at different tables, I even took into consideration the shape of the tables and the spaces between chairs,” he added.

The cafe is located on the ground floor of the building, and there is a conference room on the second floor that customers can reserve for a fee.

On the third and fourth floors is the start-up charity company C Program and the car-sharing company So Car.

“We are preparing programs to bring in aspiring social start-up entrepreneurs and people who have already founded start-ups to gather and create bigger innovations,” said Kim.

As the concentration of start-up campuses around Teheran Road in Gangnam District, southern Seoul, has overflowed into industrial areas of Seongsoo-dong and Gwanghwamun, CoW & DoG and other similar co-working spaces are attracting attention. 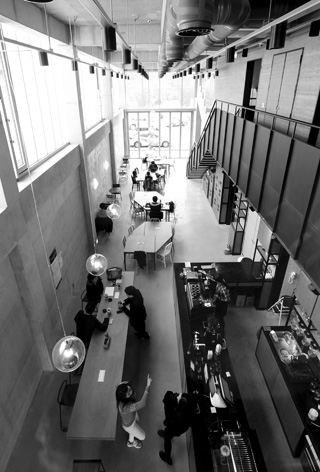 Start-up founders chat at CoW & DoG, a co-working cafe for entrepreneurs where they can drink coffee for a monthly fee. CoW & DoG, which stands for Co-Working and Do Good, is located in Seongsoo-dong, central Seoul, near many other start-up support centers. By Kang Jung-hyun

The cafe atmosphere has become a key way for start-up founders with similar dreams to socialize and share information.

Asan Sharing Foundation operates a cafe on the first floor of its building, Maru180, in Yeoksam-dong, Gangnam, and it was converted into a start-up support center last April. The cafe is operated by a new start-up, Mike Impact.

By paying 150,000 won ($140) a month, customers can get free drinks from 8 a.m. until 11 p.m. and use the area as their own office. Dozens of people working to get their business off the ground go to this cafe every day to work.

“Through word-of-mouth that many famous start-up founders come here, even foreign founders and marketing experts who are interested in Korea flock to the cafe,” said Lee Deok-hwa, the manager.

D.CAMP, the first start-up support center to settle on Teheran Road in Gangnam two years ago, has recently established a global center at the requests of start-ups and venture capitals from other countries who want to connect with Korean companies.

As co-working cafes become a more important part of networking for start-ups, Google’s Campus Seoul, which will open in Autoway Tower near Samseong Station in Gangnam in the first half of this year, is also looking for the best way to manage a cafe.

She said that a cup of coffee could lead to the creation of what Google calls a “unicorn” start-up, or one that is worth more than 1 trillion won.

The Startup Alliance, established by the Ministry of Science, ICT and Future Planning, Naver, Daum Kakao and SK Planet, hold a Teheran-ro Coffee Club at 8 a.m. every second and fourth Wednesday of the month.

At first, only three or four people attended, but that number has risen to 60 or 70 now. Not only the start-up founders but also office workers and public servants of different age groups participate.

“In Boulder, Colorado, through a club where many start-up founders meet in the morning for coffee, a number of successful start-ups were established,” said Lim Jung-wook, head of Startup Alliance. “It will be the same for Teheran-ro, as they will find good partners among people with similar interests.”