Businessman gets second chance after life on street

Businessman gets second chance after life on street 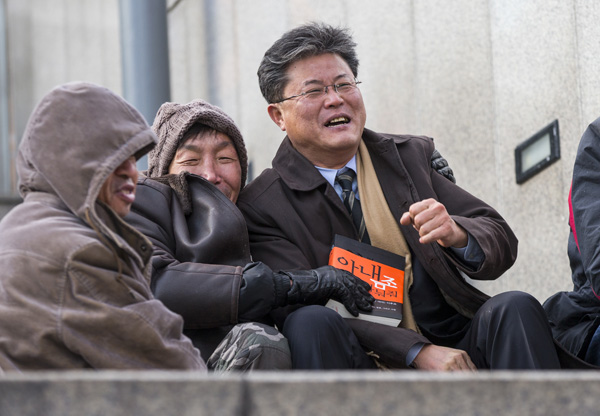 Kim Tae-hyeon, a self-made businessman who was once homeless and lived in Seoul Station, reunites with his old friends after a long absence.By Ahn Seong-sik

Self-made businessman Kim Tae-hyeon recalled a time when Seoul Station was like his second home. Because up until five years ago, that was where he lived, homeless and destitute.

He was once a successful international trader, but then one day in the spring of 1998, he fled by night as his debts snowballed from increased loan rates. His last hope, a major Australian company, had also just reneged on a supply contract with him, turning its eye toward a different company.

So Kim moved to Pyeongtaek in Gyeonggi, then Yeosu in South Jeolla, to seek out new opportunities. Those tries, however, all ended in failure. In 2006, after eight years, he literally had nothing - not even money for groceries, Kim said.

He went without food for four days.

“I couldn’t admit to the situation; I was still so proud,” he said. “I couldn’t imagine myself stepping into a local soup kitchen.”

But as time went by, Kim’s hunger slowly took over, and he resorted to digging through trash cans in the hope of finding something to eat.

That was how, in Yeosu, South Jeolla, he realized he was truly homeless.

Kim resisted taking off the suit he was wearing, believing that it demonstrated what kind of person he used to be. But in a few months, the suit wore out and he had to trash it.

“I remember drinking heavily the day I had to throw it away,” Kim said. “It was heartbreaking.”

The homeless around him eventually came to his rescue, however, offering survival tips and support. They led him to a clothing collection box nearby to get shoes and new clothes to wear. They also told him he could find washing supplies in the trash cans near the local public baths.

“Homeless people become friends easily over a drink or smoking a cigarette,” Kim said. “In a way, they are naive people.”

About 300 homeless people in Seoul Station disappear each year. The primary reason is illness, he said.

“Many homeless now have basic necessities to live thanks to government assistance,” he added. “However, the pain that remains deep in their minds is hardly ever treated.”

That’s why many homeless persons lose their will to live once sickness sets in, he admitted, and many die as a result.

So he made up his mind to tell the outside about their plight. In 2008, the year he moved to Seoul Station, Kim logged on to a computer at a social welfare center nearby and uploaded posts on an online community website called Agora, using the nickname “bizlink.”

At first, he thought back about his experiences as a trader and criticized the government’s exchange rate policy. And after receiving positive response, he began to write more about the lives of the homeless.

It was at that point that people - who Kim referred to as his fans - came to Seoul Station to meet him.

Kim and his fans even held events to distribute tteok-guk, or rice cake soup, to the homeless in Seoul Station on Lunar New Year and Chuseok, the two major holidays here.

In 2010, after five years living on the streets, he finally decided that something needed to change. He received an offer to live with a friend and worked his way up from there.

“I think I gradually began to accept the reality, reflecting on past years,” Kim said. “Then I admitted that everything had derived from my faults, and I was the one who was responsible for the past.”

Last November, Kim published a book that discusses gender roles, married life and love, referencing extensive research on evolutionary psychology, and collecting anecdotes from the people who came to talk to him while he was at Seoul Station.

“Around 500 people visited me and told me their personal stories during those days as a homeless man,” Kim said. “Many of them emailed me and confessed their worries.”

Later on, Kim also established the Two Heart Happiness Institute, his own one-man enterprise in which he gives out marriage and personal advice based on his own experiences and research. The name references the idea that one married couple has two hearts, not one, and must work to truly understand each other, Kim said.