For one couple, movie hits home

For one couple, movie hits home 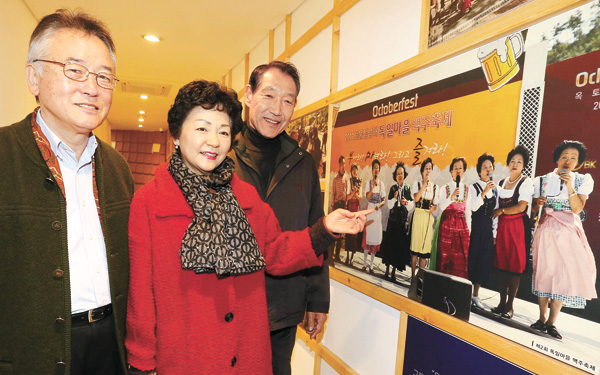 From left: Lee Byeong-jong, Seo Won-suk and Shin Byeong-yun recall the days they worked as miners and nurses in Germany at a memorial hall dedicated to guest workers in the German Village in South Gyeongsang.By Song Bong-geun

For married couple Shin Byeong-yun and Seo Won-suk, the plot of the hit movie “Ode to My Father,” now in theaters nationwide, was nothing new.

The heart-wrenching film depicts the life of a man who survives the 1950-53 Korean War and works to become a breadwinner during South Korea’s modernization era, considered to be the toughest period in Korean history.

The protagonist in the film goes to Germany to work as a miner to earn money. It is there that he meets his future wife, who works a nurse to earn a living for her family.

“I couldn’t stop crying while watching the movie because all of my memories of those hard years came to mind,” said Seo, who also worked as a nurse in Germany nearly 30 years ago.

In exchange for its work force, the Korean government received loans from Germany to build factories and infrastructure.

Shin and Seo are one of five couples who currently reside in the German Village, located in South Gyeongsang.

Shin’s journey began in 1971, when he found a newspaper advertisement recruiting miners to work in Germany. At the time, he was working at a fertilizer company earning 20,000 won per month.

“It was roughly two million won a year,” he recalled, “which became six million won in three years. Back then, tuition at a four-year college was slightly less than a million won. How could I not be tempted by that option?”

The mining work, however, was extremely severe, Shin recalled.

Miners worked 600 to 1,000 meters below ground, enduring temperatures around 40 degrees Celsius (104 degrees Fahrenheit), and underground tunnels were so low that they couldn’t stand up straight. Every time he returned to his room, Shin said, he collapsed on his bed and immediately fell asleep.

From time to time, the news that some of their co-workers had lost their lives or become paralyzed in accidents caused a deep sense of depression and despair among the miners.

“I thought this is what hell would be like,” said Lee Byeong-jong, another former miner who lives in the German Village.

Like Shin, Lee also married a fellow guest worker, Moon Won-ja, who used to work as a nurse. The two met in Germany.

The nurses, however, did not fare much better. Practical nurses were tasked with cleaning and preparing corpses. And even after they finished training, they still had to handle messy jobs - cleaning and replacing patients’ bedpans, for instance.

“When I returned from work, I used to close the door and cry alone in my room at night,” Seo said. “It was exactly like in the movie.”

Unlike in the film, however, unmarried miners were rare, as only those 26 or older were eligible to apply as miners. Unmarried miners and nurses in Germany often used to date, the couple recalled, dancing the twist in German nightclubs.

Later, many of those who returned to Korea worked at local companies or started their own businesses, and some came down to the German Village in the 2000s when it was first established.

While some of them continued working as nurses while living in the German Village, many run pensions - a type of guest house or boarding house - sell German snacks, or work as a commentators at historical exhibitions.

The number of visitors to the village on the weekends has ballooned fivefold since “Ode to My Father” was released on Dec. 17. Since then, the enclave sees between 4,000 and 7,000 visitors per day on Saturdays and Sundays. 