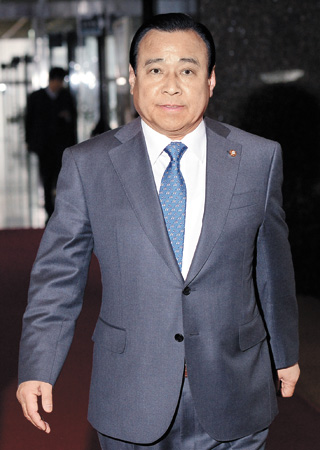 President Park Geun-hye nominated Friday veteran lawmaker Lee Wan-koo as her new prime minister and carried out a minor restructuring of the Blue House secretariat as her approval rating plummeted to the lowest level ever, 30 percent.

While keeping herself surrounded by loyalists in the Blue House, including Chief of Staff Kim Ki-choon, Park decided to replace Prime Minister Chung Hong-won with Representative Lee, floor leader of the Saenuri Party.

“Communication between the government and the National Assembly is extremely important to push forward the government agendas of economic reform and national renovation,” said Yoon Doo-hyun, senior secretary for public relations. “Lee has a deep understanding of the president’s philosophy and contributed to the smooth operation of the legislature by cooperating with the opposition parties.”

Yoon said Lee and outgoing Prime Minister Chung will have a discussion on a cabinet reshuffle to recommend to the president and any decision will be announced later. 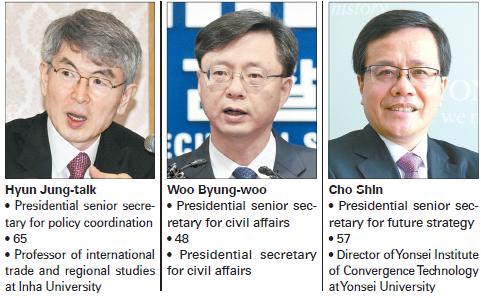 Chung already offered to resign from the post to take responsibility for the deadly Sewol ferry disaster last April and the bungled government response. But Park had to retain him because two nominees to replace him dropped out during the confirmation process due to scandals involving their pasts.

Park also restructured her secretariat and introduced a group of special advisors following criticism that she is isolated and out of touch with public sentiment. Park, however, did not replace her embattled Chief of Staff Kim or a trio of secretaries who had served Park for years since her political debut in 1998. They have all been accused of keeping the president in isolation.

While Park did not remove her key confidants in the Blue House - Lee Jae-man, presidential secretary for administrative affairs, and Jeong Ho-seong and Ahn Bong-geun, personal secretaries to the president - she changed their roles.

Ahn was reassigned to serve as presidential secretary for government information under the senior secretary for public relations.

The three secretaries were a focus in the biggest political scandal of the Park administration, which involved a leaked Blue House internal report discussing behind-the-scenes string-pulling. The report called the three men “doorknobs,” because they control access to the president.

During a New Year’s news conference on Jan. 12, Park expressed her undeterred trust in the three aides.

“Park decided to carry out reshuffles in the cabinet and the Blue House in order to improve administrative efficiency and make changes that the people can actually feel as her presidency enters its third year,” Yoon said.

It remains to be seen if the shuffles will turn around Park’s plummeting approval rating. Reorganizing the cabinet and Blue House is a traditional way to get beyond scandals in Korean politics.

According to Gallup Korea, Park’s approval rating hit an all-time low of 30 percent this week, 5 percentage-points down from last week. During the early months of last year, her approval rating was above 60 percent.

The survey operator said public anger over higher tax bills drove down her rating this week. The political scandal about power struggles at the Blue House and people’s disappointment in her New Year press conference had already done damage to the rating, Gallup Korea analyzed.

Following his nomination as prime minister, Representative Lee said his top priority will be improving the government’s communication with the people and the opposition parties and tightening slackened discipline of civil servants.

I will be a prime minister who will say what needs to be said.”

Lee, 64, is a native of Hongseong, South Chungcheong, and he started his career as a civil servant in 1974 in the county office of his home region. He joined the police and headed the North and South Chungcheong Provincial Police agencies in 1993 and 1994.

He was elected as a lawmaker in 1996 and was re-elected in 2000. From 2006 until 2009, he served as the South Chungcheong governor. In 2013, he won again in a legislative election and became the Saenuri Party floor leader last year.

To be formally appointed as prime minister, Lee has to go through a National Assembly confirmation hearing.

The ruling Saenuri Party expressed enthusiastic support for Lee’s nomination, and the main opposition New Politics Alliance for Democracy (NPAD) also did not hide its approval of Lee.

Shortly after the announcement of his nomination, Lee visited the leadership of the NPAD and pledged efforts to communicate with the opposition party.

“As he said, he should treat the NPAD as a partner in state affairs and run the government based on dialogue, mutual gains and communication,” Rep. Park Wan-ju, spokesman of the NPAD, said. “The people expect Lee to perform his job with actual authority. He must make cabinet reshuffle recommendations to the president as the Constitution states.”

In Korea’s administrative system, where executive power is heavily concentrated on the president, the role of the prime minister is limited.

“Park used to prefer a prime minister who can act as a manager, but now she’s selected a politician,” the source said. “This means she will allow him to play an influential role.”

While the opposition NPAD was approving of Park’s choice of prime minister, it criticized her Blue House reshuffle. “The public is disappointed at Park’s undeterred trust in Chief of Staff Kim,” NPAD spokesman Park said. “And the people are enraged at the president’s unlimited trust in the three ‘doorknobs.’”