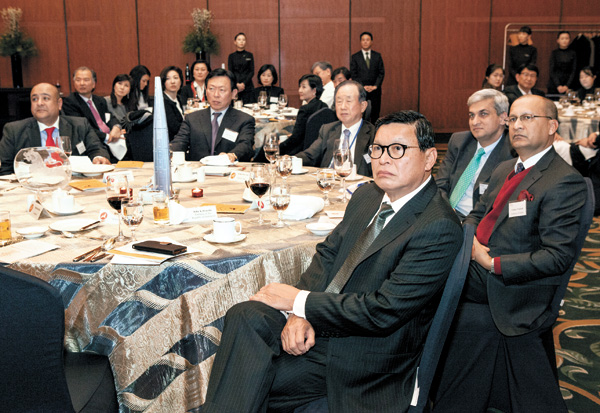 Indian Ambassador to Korea Vishnu Prakash was named the Asia Society Korea Center’s 2014 Ambassador of the Year on Thursday, which he called “humbling and thrilling.”

Prakash added that he shares the same birthday as the non-profit organization, Nov. 1, 1956.

Prakash told the Korea JoongAng Daily on receiving the award, “I am absolutely delighted and humbled and thrilled to receive this honor, especially from the Asia Society.” He added the Korea Center “is doing a wonderful job and has a very dynamic leadership.” The Asia Society, headquarter in New York, was founded in 1956 and its Korea Center opened in Seoul in 2008, chaired by Shin Dong-bin, chairman of the Korean Lotte Group.

Albudaiwi said, “I must admit that the Asia Society was one of the first institutions that I reached out to when I first arrived in Seoul in October 2013. The society provided me with access to Korean society and culture, not to mention knowledge and experience about Asia as a whole.

“It’s not only because of the geographic proximity, but Asian nations have been strategic partners to Kuwait even before the discovery of oil,” he added. “I am deeply committed also to enhancing the relationship between the Republic of Korea and the State of Kuwait.”

The awards were presented by the recipient of the 2013 Ambassador of the Year award, Indonesian Ambassador to Seoul John A. Prasetio, and former prime minister Lee Hong Koo, honorary chairman of the Asia Society. Lee, also an adviser to JoongAng Ilbo, whose association with the Asia Society spans four decades, pointed out, “This year marks the 70th anniversary of the end of the second world war and the liberation of Korea.”

He said over the history of the Asian Society, the organization has promoted notions of how to maintain peace after World War II and prevent misunderstanding and ignorance of other parts of the world and other countries.

“From the beginning, Koreans have been able to join this kind of movement,” he said, “because our experience during the colonial period, Cold War and the division of Korea, all this has taught us to really promote mutual understanding in our region, and that it’s essential to maintain peace and prosperity not only for us but for our neighbors and indeed all the citizens of the world.”

The society has centers in cities including Mumbai, Hong Kong, Manila, Sydney and Shanghai.