Minister says unification will come as a surprise

Minister says unification will come as a surprise 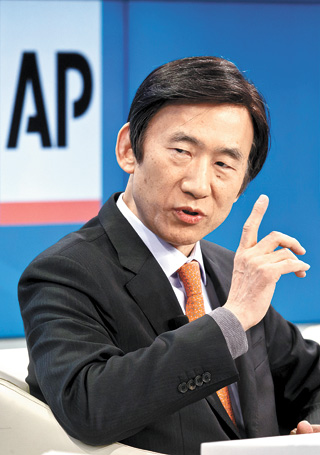 The unification of the Korean Peninsula “will come in an unexpected manner and moment rather than in a predictable fashion,” said Korean Foreign Minister Yun Byung-se on the sidelines of the World Economic Forum (WEF) in Davos, Switzerland, on Thursday.

About 2,500 political, economic and business leaders from more than 140 countries gathered for the four-day conference that started Wednesday in Davos-Klosters, Switzerland.

At a “Korea Night” event on the sidelines of the 45th WEF, Yun made a speech describing the significance of unification as Korea marks the 70th anniversary of liberation from Japanese colonial rule and the division of the Peninsula.

Envisioning a unified Korea that will enable a transcontinental railway to reconnect the Eurasian continent, he said, “That day is coming. And we are already on that path.”

“Korea Night” was attended by top executive such as Standard Chartered’s Jaspal Bindra, CEO of the Asian region and an executive director at the group.

This year’s meeting was held at the Morosani Schweizerhof Hotel Davos under the theme of “Journey to One Korea, One Korea Night,” and was attended by about 500 guests from more than 42 countries, including Jacob Frenkel, chairman of JPMorgan Chase International, Sir John Peace, chairman of Standard Chartered, and Yorihiko Kojima, chairman of Mitsubishi Corporation.

In his address, Yun outlined the three steps to unification: removing nuclear weapons, building up inter-Korean rapprochement and creating a conducive international environment. He also addressed the “true costs of division,” which he called a “geopolitical curse,” providing examples such as the abysmal human rights situation in North Korea, the tension from the North’s pursuit of nuclear weapons and long-range missiles, and the pain felt by families torn apart by war.

“A reunified Korea will be another miracle on the Korean Peninsula,” Yun said, adding that unification “will bring us real connectivity, linking the Eurasian continent as one.

“Just imagine the Trans-Korea and Trans-Siberian Railway reconnecting the Eurasian continent,” he continued, “Koreans, Asians, people from all over the world will hop on the train from Seoul to Paris, Berlin and Davos, and vice versa.”

This is in line with the Park Geun-hye administration’s “Eurasia Initiative,” a plan to boost the regional economy through free trade and economic cooperation.

As part of the initiative, she proposed the Silk Road Express, a railroad that would connect the Korean Peninsula to Russia, China, Central Asia and Europe. President Park, who attended the forum last year, said in a video message played at the event, “Seoul will patiently seek dialogue and cooperation with the North.”