Chinese tourists reach high of over 6M in 2014

Chinese tourists reach high of over 6M in 2014 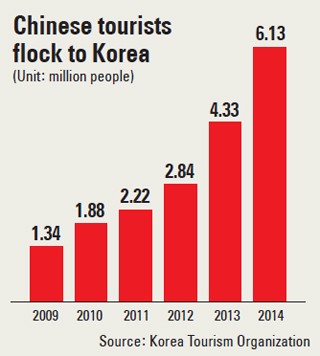 Last year, a record number of about six million Chinese tourists came to Korea, a 41 percent increase from the 4.3 million who visited in 2013.

According to the Korea Tourism Organization, the drastic increase to 6.1 million visitors cemented the status of the Chinese as the most common tourists to Korea, while the number of Japanese visitors, who once topped the list, has plummeted to its lowest since 2007.

Chinese tourists outnumbered the Japanese for the first time in 2012 and have maintained the top spot ever since.

In part due to the surging number of Chinese tourists, the number of international arrivals to Korea increased by 8.3 percent last year from 14 million in 2013 to 16 million, KTO data showed.

The number of tourists visiting the country in December surpassed one million for the first time, according to KTO data. Travelers usually avoid visiting Korea in December because of the cold weather, but the organization said that the Korea Grand Sale, a large-scale discount event exclusively for foreign tourists, appears to have drawn people in. Sponsored by multiple government entities and retailers, about 28,000 stores offered discounts, lucky draws, treats and other rewards from Dec. 1 to Feb. 22.

A major difference last year was that the sales event period was extended. From 2011 to 2013, the Korea Grand Sale was held in January and February, but this year, organizers moved the start date to Dec. 1.

Many Chinese tourists said shopping was one of the major reasons they visited Korea, the tourism agency noted. It also added that the number of 20- and 30-something Chinese tourists jumped by 52 percent over the previous year.

The rising proportion of younger tourists means that their travels to Korea will likely be centered on shopping because many are K-pop fans who want to buy products related to singers and celebrities.

Spending by Chinese tourists has also continued to rise. The Korea Institute for Industrial Economics and Trade found that the amount spent by a Chinese person during a trip to Korea averaged about $1,300 in 2008. That amount had risen to about $2,300 in 2013, an 80 percent jump from 2008. The total spending by Chinese tourists reached 7.6 trillion won ($7 billion) last year, according to the institute, which did not include a breakdown of average spending.

Their purchases accounted for 49 percent of overall spending by tourists in 2013, according to the Korea Institute for Industrial Economics and Trade.

Last year, Chinese people came to the country in droves to attend the Incheon Asian Games and for China’s national holidays in the first week of October, when the KTO estimated that 160,000 Chinese tourists visited Korea.

Lotte Department Store said sales made via China UnionPay credit cards increased 87 percent between Oct. 1 and 5 over the same period in 2013, accounting for almost 20 percent of all sales made in the five-day period. UnionPay is a payment service that most Chinese people use.

Hyundai Department Store saw its sales via UnionPay rise by 86 percent from Oct. 1 through 5.

Tourists from other major economies appear to be tighter with their spending, data from the Korea Institute for Industrial Economics and Trade show.

The declining consumption reflects Japanese people’s lack of interest in visiting Korea. About 2.28 million Japanese tourists came to the country in 2014, the lowest since 2007.

The number of Japanese tourists started plummeting in 2010, which observers say is due to the sluggish economy discouraging people from spending money on traveling, as well as souring relations between Korea and Japan.

But Chinese holidaymakers will likely offset the loss.

The Korea Culture and Tourism Institute estimated that the number of Chinese tourists would reach 7.49 million this year. The central government is considering measures to encourage Chinese visitors to spend even more.

The Park Geun-hye administration said on Jan. 18 that it will issue licenses for more duty-free shops - three in Seoul and one on Jeju Island - which are the two most popular destinations in Korea.