SNU prof. gives up tenure for a new challenge

SNU prof. gives up tenure for a new challenge 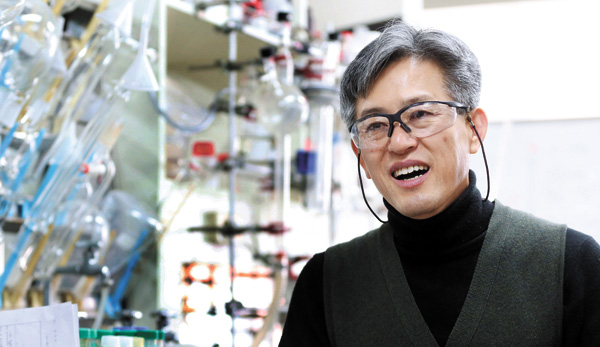 Seoul National University Prof. Lee Jin-kyu, who will be working at LG Chem next month, speaks at a lab in the school on Wednesday. He wears protective glasses because of the lab’s safety rules. By Kim Sung-ryong

For many Koreans, a tenured professorship at Seoul National University is one of the most admired and respected jobs, making Lee Jin-kyu’s choice to give up his position all the more rare.

Lee, who taught chemistry at Korea’s top university for 17 years, was the local business industry’s talk of the town last week after LG Chem announced it has hired the 52-year-old as its research chairman.

But why did Lee give up the honor and advantage of his tenure, which he could have maintained for the next 13 years at least?

On Wednesday, the professor was busy packing up his belongings at a lab in SNU. He said that he will be moving to Daejeon - where his new job LG Chem Central R&D Center is located - this week with his wife.

In a previous interview with the JoongAng Ilbo, an affiliate of the Korea JoongAng Daily, Lee said he thought long and hard about giving up his position at SNU. But in the end, his curiosity about how companies actually commercialize technology helped him to make the choice. He cited being given enough time for research as another reason why he decided to join LG Chem.

The professor also unveiled a goal: to create a nanomaterial that could change the world.

His story begins with his thirst for new materials. Lee is a world-renowned scholar in inorganic nanomaterials. He earned a doctorate degree from the Massachusetts Institute of Technology (MIT) under the guidance of Richard R. Schrock, the winner of the 2005 Nobel Prize in chemistry.

Lee researches how to develop new material with small particles. The Yonsei University graduate said he wanted to actually make a product based on this technology, but at SNU that was almost impossible.

“I have tried an industry-university cooperation program, but it wasn’t easy to get a patent and make a business model to release product,” he said.

In 2006, Lee and a student developed technology to mass-produce quantum dots, nanocrystals made of semiconductor materials that are used in displays.

“As the industry-university cooperation program gave technological investment, we even created a start-up, but maybe as the technology was too advanced back then, it didn’t end up being commercialized,” he said. “At the university I felt a limit since it wasn’t easy to find more students, prepare funds and efficiently manage the process to make a business model.”

While continuing his research on inorganic nanomaterials, he met Yoo Jin-nyoung, the chief of LG Chem Research Park, two years ago and experienced a small part of “company life.” The experience sparked his dream again and eventually led to him joining the company.

Some people say that an explorer’s DNA resides within Lee. After finishing his studies in 1997 and returning to Korea, Lee vowed to himself that he would come up with his own research instead of following the studies conducted by his teachers.

A long and challenging journey started from there.

Lee’s goal is to make things people have seen in science fiction movies happen in real life. A magnetic nanoparticle is one thing he pins big hopes on, as Lee claims that injecting this into the human body would help remove toxins after floating within like a red blood cell.

But at the same time, Lee is also afraid of his new challenge.

“The scale of company research is at the different dimension of what’s done in college,” he said.

Although he is leaving the school, Lee had advice for his students and young people in general, in which he also explains why he decided to start this new chapter of his life.

“These days, many things are changing,” he said. “Don’t follow what’s hot at the time, but do what you really want to do.”