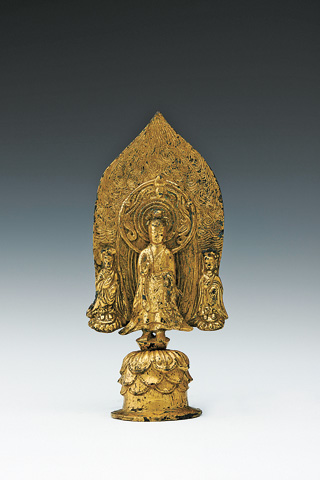 With the background of a large halo-like nimbus, the image of the principal Buddha is situated in the center of this statue with two apostles at both sides. The image of Buddha is large and high compared with the rest of the body.

His oval face with its subtle smile is bent forward slightly.

The shoulders and the chest look narrow but are also depicted as balanced and strong.

The robe covering both shoulders is expressed with the fold of a V-pattern in the front, and on both sides a feather-like skirt is carved in an exaggerated manner.

This statue is similar to the gilt-bronze Buddha triad with the inscription “Sinmyo Year” in terms of style. The two follow the trend that was in fashion in China in the fifth and sixth centuries.

According to the inscription on the back of the halo-like nimbus, this is considered to be a piece created in the seventh year of King Wideok of Baekje Dynasty (563).