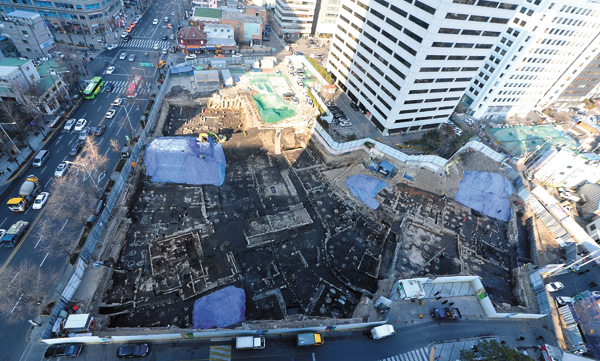 At the site behind Jonggak Tower in Jongno, central Seoul, archaeologists found alleyways and building sites formed between the early part of the Joseon Dynasty and Japan’s colonial period (1910-45). Provided by the Cultural Heritage Administration

Jongno District in central Seoul was an exciting place during the Joseon Dynasty (1392-1910), bustling with merchants and government officials on their way to and from the palace.

The area is still one of the busiest, most vibrant destinations in Seoul, filled with tired office workers and curious tourists from overseas.

In fact, not even many Seoulites know this, but Jongno - specifically the 2.8-kilometer (1.7-mile) road that bisects downtown Seoul horizontally - is the center of Korea’s road network.

A stone marker proclaims that the site is Seoul’s “Kilometer Zero” - the point from which all distances are measured. 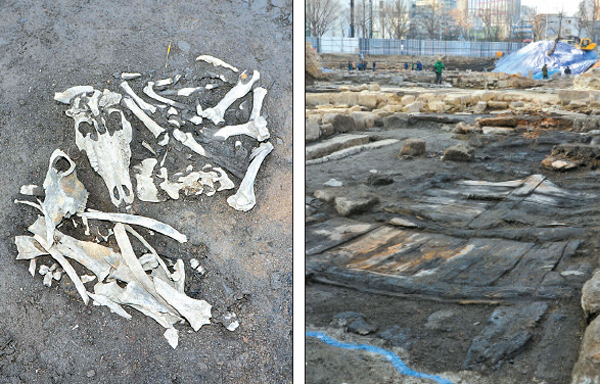 Animal bones (left) and wooden planks that make maru, or the floors of a living room in today’s sense (right), were found in rather good condition, helping create a picture of just how people of the time lived.

Earlier this month, the Cultural Heritage Administration and Hanul Research Institute of Cultural Heritage unveiled a site behind Jonggak Tower near exit No. 3 of Jonggak Station on Seoul’s subway system (Line 1) where they found alleyways and building sites formed between the early part of the Joseon Dynasty and Japan’s colonial period (1910-45).

The foundations of buildings are evident, which provides clues as to where the alleyways and houses were. Roof tiles, animal bones, wooden planks that make maru, or the floors of a living room in today’s sense, were also found in rather good condition, helping create a picture of just how people of the time lived.

Hanul’s archaeologists said through a press release on Jan. 14 that they found a total of three alleyways on the site, which measures approximately 7,000 square meters (1.73 acres).

They said traces of buildings were found to the left and the right of the alleyways and that they appear to have been very close to each other.

What is very interesting is that unlike the general notion that rich aristocrats resided in Jongno, which is inside Seoul Fortress, and common people lived outside, the houses, according to the sizes and materials used, appeared to have belonged to various social groups.

Jongno was home to some of the best hanok, or traditional Korean houses, in Seoul.

But few remain today. One is the home of former President Yun Po-sun (1897-1990), a 130-year-old hanok in Insa-dong, central Seoul, which is often cited as one of the most beautiful and representative traditional Korean structures in the country.

At the same time, Jongno housed sijeon, or stores licensed by the government.

“The government licensed certain stores to regulate commerce because there were a lot of squabbles between businesses over space as stores haphazardly sprang up,” said Park Eun-suk, a researcher at the City History Compilation Committee of Seoul.

Park has authored two books on the history of Korean marketplaces.

The archaeological exploration of Hanul Research Institute of Cultural Heritage - which kicked off in June and is slated to wrap up next month - also found that the general structure of most of the alleyways in downtown Seoul looked the same as they did about 500 years ago.

“The width of the alleyways, measuring about 3 meters [10 feet], is not all that different from pathways today,” said Park Ho-seung, one of the lead researchers at Hanul.

“This means that the alleyways maintained their original shape for about 500 years without major changes, showing how the ancient city has somewhat carried on.”

In fact, other archaeological findings within the downtown area around Gwanghwamun and City Hall, dubbed by locals as “inside the four gates,” prove that the urban structure of Seoul today is not that different from Hanyang (the old name for Seoul) during the early Joseon Dynasty.

When asked if the area will be preserved, Park of Hanul said authorities will likely make a final call soon but that they are leaning toward preserving the site and that a museum is one option.

Jongno, literally Bell Road, gets its name from the bell known today as Bosingak Bell.

“The king went to Gwangju and saw the newly made bell. [...] He ordered some 1,300 soldiers to move it to the capital,” according to the Annals of the Joseon Dynasty dated April 4, 1398.

The bell had important functions in the capital. It was rung to signal the opening and closing of the city gates every day and also to alert people in the case of fire, according to historical records.

Designated Korea’s National Treasure No. 2, it’s the biggest bell ever made in Korea.