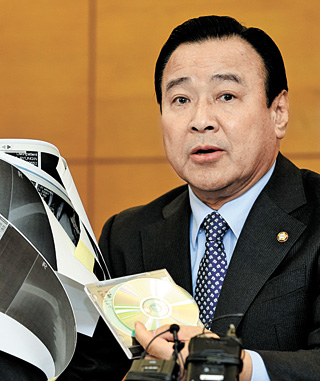 Prime Minister nominee Lee Wan-koo has taken the initiative to curb suspicions about his son getting out of military service, about his own service being curtailed and also questions about his assets in advance of a confirmation hearing scheduled for early February.

The former floor leader of the ruling Saenuri Party nominated by President Park Geun-hye Friday released a flurry of documents on Sunday including prescriptions from hospitals and x-rays to combat rumors that his second son dodged obligatory military service.

The documents showed that the 34-year-old received a grade three in a physical examination for the draft in August 2000. But when he was studying at a university in the United States he suffered a ruptured cruciate ligament during a soccer match in October 2004. He went back and forth between hospitals in Seoul and Michigan for an operation and treatment and underwent three additional draft examinations between July 2005 and June 2006.

The fourth examination gave him a grade five, which qualified him for an exemption. Young men who receive grade fives are exempted from service, only being required to join annual training for the civil defense service through the age of 40.

“If necessary, I will accept any demand or measure [to prove my son’s innocence] from the media, doctors or any relevant figures this week,” Lee, 65, told reporters Sunday.

Lee, who has been named to replace Prime Minister Chung Hong-won, resigned from his floor leader post on Sunday and started to work from an office near the Blue House that the government reserved for him.

Regarding a rumor that Lee himself had been discharged from the military early because of a lung disease, the Chungcheong-born former government worker said that wasn’t true. He explained he was ordered to serve one-year reservist duty due to a foot malformation in his initial draft examination and he finished that service in April 1977.

Lee also explained his second son’s controversial inheritance of 1.83 billion won ($1.7 million) worth of land from his wife (the son’s mother) in 2011, which was disclosed in tandem with his nomination. In March last year, Lee did not list the second son’s property when he made public details of his personal assets, a requirement for any high-level government official including lawmakers under the public service ethics act.

Lee said on Sunday his son’s asset was not disclosed since he is grown up and making an independent living. The assets he registered at the time were valued at 1.45 billion won, including an apartment in Dogok-dong, southern Seoul, a large sedan and bank savings. Lee noted that his wife gave the son property she inherited from her prosperous father in 2011. He said the son has paid 456 million won in inheritance tax thus far.

Meanwhile, Lee Joo-young, former minister of oceans and fisheries, said on Sunday he would run for the ruling Saenuri Party’s floor leader post vacated by Lee.

“Many people worry about the party’s future and are concerned about whether the country will face crisis,” he said. “I will be the right voice for the people and the nation.”

The former judge stepped down from the ministerial post on Dec. 24 and President Park commended him in public for his handling of the Sewol ferry disaster.

The Blue House is expected to exercise yet another minor reshuffle this week, filling the empty oceans and fisheries minister post. Ministers of foreign affairs, unification and justice may be replaced, analysts predict.