Playgrounds torn down permanently over safety

Playgrounds torn down permanently over safety 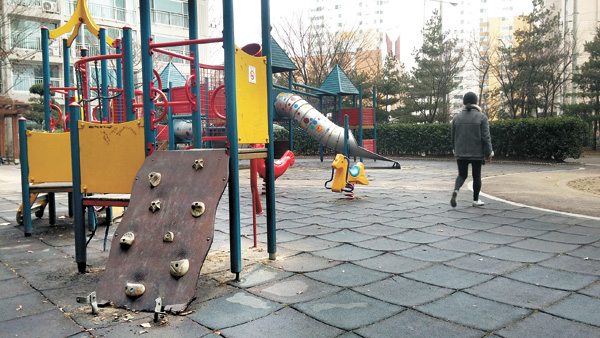 A worn-out playground in Yeongdeungpo District, Seoul, is on the verge of closure. By Jang Hyeok-jin

The mother of a 5-year-old girl, who lives in a local apartment complex in Yeongdeungpo District, southwestern Seoul, was baffled on Wednesday when she learned that the neighborhood playground was to be torn down.

“I was surprised when I heard that we won’t have the playground anymore,” the woman said. “When I asked the management office, they said: ‘We decided that we didn’t need to spend a huge budget rebuilding the playground.’”

The playground, which has worn-out swings and paint stripped off its slides, will be demolished in line with the Seoul Metropolitan Government’s announcement last August that local playgrounds that haven’t received safety inspections will be dismantled by Jan. 26, to meet regulations.

Those that didn’t receive an inspection number 691; and 58 playgrounds were graded as having subpar safety standards during assessment.

Ten percent of the playgrounds in Seoul, or 749, are set to be torn down.

But after residents with children raised fierce opposition to the measures, the city government offered a compromise, announcing Thursday that they would construct what it has termed creative playgrounds in place of the structures to be demolished.

That includes those in Seodaemun and Gwanak Districts.

Those upgraded playgrounds will consist of facilities themed around classic novels like “The Jungle Book,” for instance, as well as other educational concepts. Safety guards will also be employed to watch over the children as they play and hired helpers will instruct children through a range of activities.

The creative playgrounds will be built by Children’s Day, which falls on May 5, according to the city government, and 5.8 billion won will be set aside for the project.

Still, some have pointed out that the city government’s recent project has limitations, notably that the new playgrounds will be built in city parks, while the majority of substandard playgrounds were situated in apartment complexes.

The upgraded facilities, critics contend, can hardly make up for the absence of residential playgrounds.