Retirement is far less painful if you are prepared

Retirement is far less painful if you are prepared 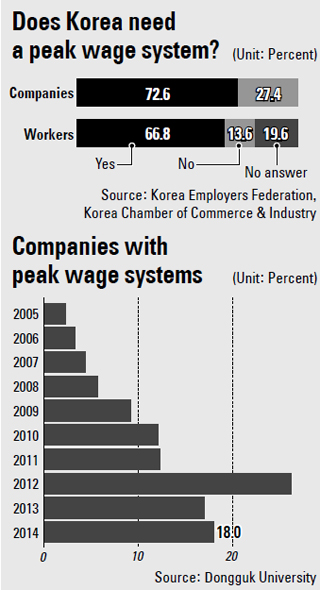 A 50-year-old man who asked not to be identified for this story was working as an executive at a major conglomerate just three years ago. Then a twist of fate changed his life: He was fired.

The man, who had never thought about preparing for re-employment, sent resumes to dozens of companies but none replied. After months coming up empty, he decided to open his own restaurant with his wife using his severance money.

But after just 10 months, his business crumpled, and the former chaebol worker had to withdraw money from his insurance policy to make ends meet. It took him two years before he landed another job, this time at a small company. “Even though I get paid less than half what I used make in my last job,” he said, “I’m so fortunate now that I have a consistent source of income.”

Another former corporate worker interviewed by the JoongAng Ilbo had a similar story, with the exception that he had planned ahead before leaving his previous job.

One year before his retirement, the 56-year-old, who also requested anonymity, signed up for a course at a career-management center run by his company. He was hesitant to take the class at first, he said, because he felt as if he was being pushed by his company to quit.

But during the year he prepared for reemployment, he learned how to improve his resume and boost his interview performance.

The career center recommended a company that specialized in manufacturing semiconductor equipment, where he could make good use of his experience. After resigning, he landed an executive-level position at that company, which has 47 international patents.

Yet while both men have commonalities in that they both sought out a second career, there are major differences. The former spent two years unemployed, losing his severance pay in a failed business venture, while the latter was rehired quickly and makes more now than before.

Career experts say preparing for reemployment before retirement is crucial in setting one’s direction for the years to come.

“Preparing for reemployment before you leave your company sets the course of your life for the next 10 years,” said Ji Seo-geun, the director of the career-management center at Samsung Electronics.

In a survey by the non-profit Small Enterprise and Market Service, 73.7 percent of salaried workers said that a career-management center at their companies would be preferable. However, only 16 percent of businesses nationwide have such programs.

That’s in sharp contrast to Japan, where 78 percent of companies run a career-development center designed to offer guidance to employees on investment plans and self-improvement, depending on their age.

Without concrete plans, 48 percent of those whose retirement is looming said they feel a deep sense of frustration and depression, the survey showed.

Experts point out that while workers should realize the importance of readying themselves for second employment opportunities, it is equally important for companies and the government to follow suit by providing assistance.

The current economy is lagging as the baby boomer generation - those born between 1955 and 1963 - prepares to retire, and many experts say they would advise them to stay at their jobs as long as possible to maintain a consistent source of income.

But the county is already squeezed by increased demand for job opportunities for those in their 20s and 30s. And in such a saturated job market, the situation is only getting tougher for workers in their 50s, who find it increasingly difficult to hold on to their positions.

For that reason, a peak wage system and part-time positions have emerged as alternatives. In a peak-wage system, an employee’s wage peaks at a certain age - say, 55 - and is reduced by a certain amount each year until the worker leaves the company. But the system, which was first introduced in Korea in 2003, is still largely shunned by workers, especially among labor unions, which are used to seeing employees’ salaries go up in line with seniority.

Labor unions insist that companies should continue the traditional salary system that prioritizes seniority, touting it as the more advantageous option for workers.

Currently, only 18 percent of Korean companies have adopted the peak wage system. At the same time, in a survey of 559 workers last December by the job recruitment portal SaramIn, 70 percent stated their support for it; of those, 64.9 percent cited the steady source of income secured through the arrangement as the primary benefit.

“It will be challenging to see an increase in the number of companies that have adopted a salary-peak system if the government leaves it to each company to decide whether to implement it or not,” said Kim Dong-bae, who teaches economics at Incheon National University.

“The government could persuade more companies to adopt the peak-salary system by mapping out guidelines that take into account both the demands from labor unions and business management.”