Business group and Choi agree on need for reforms

Business group and Choi agree on need for reforms 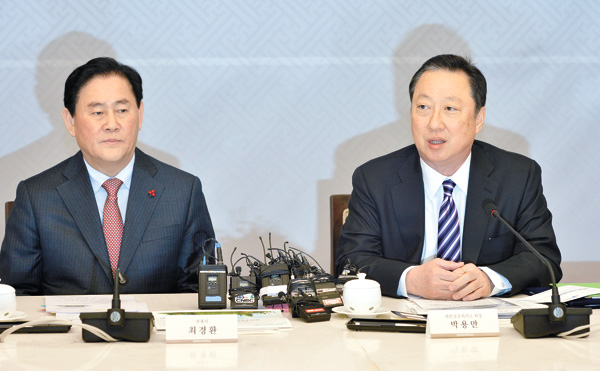 Leaders of the Korean business community and the government said on Monday that they agree on the urgent need for structural reform and promised to cooperate to make changes.

Members of Korea Chamber of Commerce and Industry (KCCI) led by Chairman Park Yong-maan met with Finance Minister Choi Kyung-hwan at the KCCI headquarters in central Seoul on Monday to discuss the coming reforms.

Both parties shared the view that this year will be a prime opportunity to make economic improvements, and agreed to cooperate to carry out the government’s three-year economic innovation plan.

The KCCI revealed its “5+5 proposal” to Minister Choi to improve the nation’s business environment amid the economic downturn.

In the first part of the proposal, industry leaders outlined five economic plans. One of the KCCI’s targets is to build 10,000 smart factories in the next five years to strengthen the global competitiveness of Korean companies. Smart factories have production lines where most of the process is carried out by robots and other technology.

To create jobs and boost the domestic market, KCCI members said they will invest in new technologies such as IoT (Internet of Things) and 3-D printing.

In the second part of their proposal, KCCI members said they support the implementation of a “one-shot” law, which the government has been pursuing since November. The law would be similar to the one passed by the Japanese government in 1999 to make it easier for businesses to conduct mergers and acquisitions. The act would remove complicated legal barriers, reduce taxes and give financial subsidies to companies.

The lobby group also requested bigger incentives for businesses that comply with the government’s guidelines on spending internal cash surpluses. This year, the government implemented new taxes on cash hoarded by companies if they have not made sufficient investments in accordance with the guidelines.

The KCCI chose this year to make its first specific proposal to the Finance Ministry because it is a non-election year, although according to the ministry the group has exchanged views with the government on several previous occasions.

“If we lose this opportunity, we won’t be able to create decent jobs for young people and future generations, leaving them hopeless,” Choi said at the meeting. “Since the Asian financial crisis, we haven’t made proper attempts to reform.”

The minister asked the business leaders to cooperate, saying that this year is their “golden opportunity” for economic innovation.

“Emerging countries such as China are pushing for structural reforms, while advanced countries are enhancing their manufacturing competitiveness,” Choi said. “The Korean economy is at risk of being sandwiched by the new moves of those countries.”

The minister emphasized that economic recovery through innovation is essential.

Choi urged the business community to support the government’s economic innovation initiative through aggressive investment and by hiring more employees.

“Young people who are graduating from universities in February are having a hard time finding jobs,” Choi said. “I sincerely ask for employment expansion by businesses.”

KCCI Chairman Park called for the government to make efforts to ease regulations, saying, “The key to structural reform is regulatory reform. If the government establishes the infrastructure, businesses will make their best effort to lead economic recovery.”

Choi said he was aware of the difficulties exporters are facing due to the strong Korean won, and that the government would work to lower the country’s current account surplus.

As for rising concerns over deflation, Choi said the government aims to push the inflation rate to 2 percent this year.