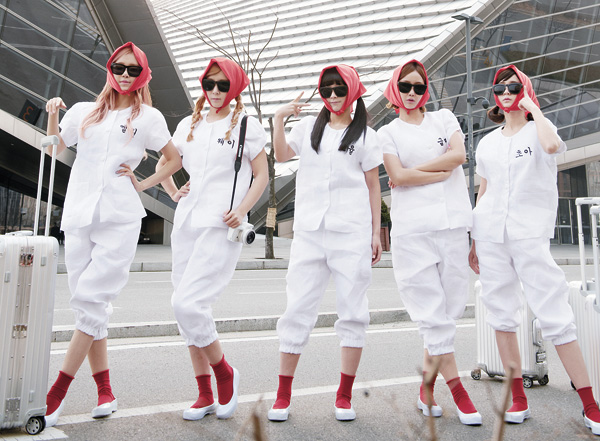 Crayon Pop has released a song in China with Chinese group DT Boys, according to the girl group’s agency, Chrome Entertainment.

The agency said on Monday the collaboration“123 Happy New Year” was unveiled through major Chinese online music portals on Jan. 22.

The agency said that the seasonal song wishes for happiness and prosperity in the upcoming Lunar New Year. The five-member girl group appear in the music video for the song wearing qipao, or traditional Chinese dress.

Crayon Pop and DT Boys will perform together on Jan. 30 for the “Youth Amigo” concert held in Beijing.

The collaboration is part of the girl group’s plan to break into the Chinese entertainment scene. Earlier this year, Chrome Entertainment said it would launch a reality TV show in the country by teaming up with Youku, the largest video-sharing website in China. In the four-part series, Crayon Pop introduces their favorite restaurants, hangouts and latest sightseeing places in Korea. It will air later this month.

Started out in 2012, Crayon Pop failed to impress local fans upon its debut but its unique choreography for “Bar Bar Bar,” in which all members wear safety helmets and sweat suits, became a sensation in 2013.