Ha shows his versatility in ‘Chronicle’

Ha shows his versatility in ‘Chronicle’ 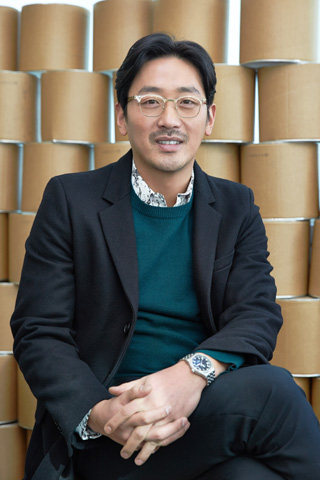 Ha Jung-woo talks about his role as a director and actor in the movie “Chronicle of a Blood Merchant.” [JoongAng Ilbo]

Ha Jung-woo is a versatile entertainer, challenging himself in acting, directing and even painting. He has received much public acclaim since debuting in entertainment in 1988.

But the 37-year-old actor has never attempted to take on two roles at the same time - until recently when he directed and starred in “Chronicle of a Blood Merchant,” a film based on best-selling Chinese novelist Yu Hua’s book of the same title.

“I prayed every day that the movie would work out well,” Ha told the JoongAng Ilbo, an affiliate of the Korea JoongAng Daily, in a recent interview.

The movie, which opened on Jan. 14 in domestic theaters, is a family drama set in the 1950s. It features actor Ha as Heo Sam-kwan, who sells blood to earn a living for his family, including his beautiful wife Ok-ran (Ha Ji-won) and three children. They lead a happy life - until Heo realizes that his first son is not his own.

In the movie, Heo is an immature adult who refuses to be called “father” when it is revealed that his first son is not his. But that immaturity becomes hard to hate when Ha plays the character, infusing him with a good dose of vitality and humor, backed by a fluent local dialect.

“In my directorial debut ‘Fasten Your Seatbelt’ [2013], I realized that I made a movie that was only enjoyable to me, which in part was because my directions to the actors were insufficient,” he said.

“Since I was the actor in ‘Chronicle,” there were no such misunderstandings.”

Being prepared to the fullest as a director prior to shooting was Ha’s strategy in pulling off his acting role. He revealed that he shot 70 percent of the movie with a handheld camera by himself before production began.

When asked about any difficulties he went through in playing the role of a father as a single man with no children in real life, Ha said, “I didn’t consider the kids as my children, but as best friends. I felt that the emotion of love remains the same.”

Ha said he felt strong affection for Yu’s original novel when asked about his first impressions of the book.

“'I asked myself, ‘How can a character like Heo exist?’ His multidimensional aspects as well as his way of speaking and making jokes by playing with words all likened to my own style.”

Ha kept most of the synopsis intact, except some of the nation-specific parts such as the backdrop of the Chinese Cultural Revolution in the original book.

Although not many changes were needed, compressing a story that spans for more than 20 years into a two-hour movie was still difficult. Seven back-up scripts show how laboring and painstaking it would have been for Ha to adapt the book.

“I got advice from directors I know,” he revealed. “Some told me that an abrupt transition into a serious drama from a comedy [in the film] was a bit awkward. But I believed it was the easiest structure that the audience would understand.”

He replaced the Cultural Revolution setting with Gongju, Chungnam, in the 1950s in order to avoid potential political controversies, which have been abundant in the movie scene recently. The 1950s in Korea was relatively free of acute social issues compared to the 1970s and 1980s.

“When I looked at the historical records, it [the 1950s] was suitable as the backdrop for a movie because there were reminders of the U.S. army in the streets and in what people of the time wore even after America pulled out of the Korean Peninsula, which I thought was pretty cinematic,” Ha said. “It was for sure a hard time, but I wanted to reflect that nostalgic mood into the movie, which is why I put a lot of effort into building the sets.”

Ha said his role model as a director is Woody Allen. “I believe that filmmakers should make a fantasy for the people distressed in harsh reality,” he said. “I want to make a fun movie that can touch people’s hearts.”

The movie is currently screening at local theaters.